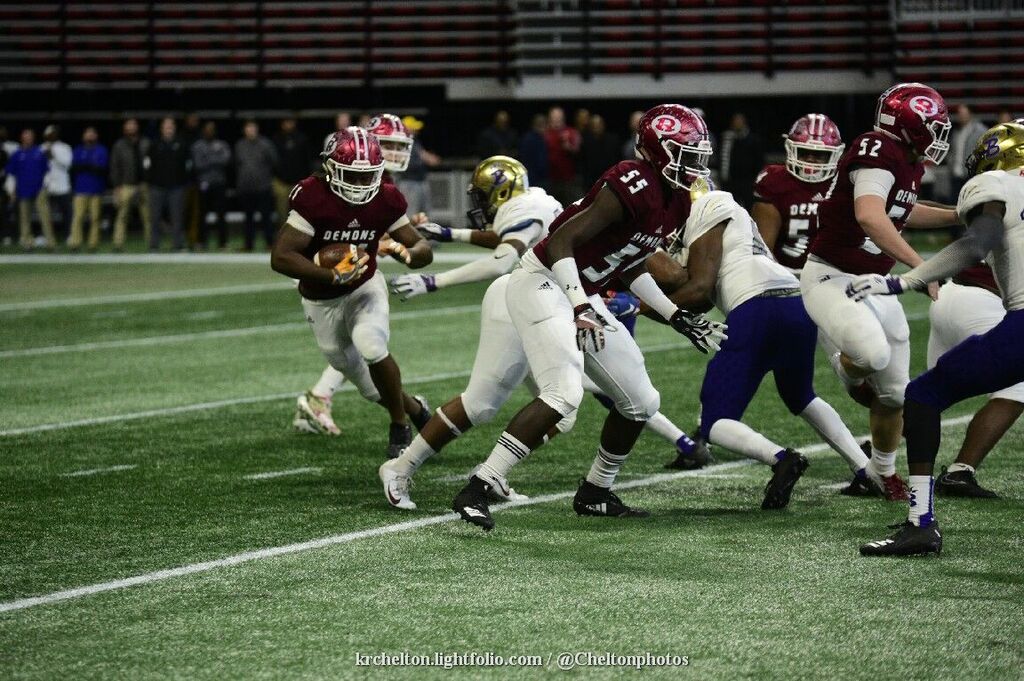 Bainbridge got a second chance and didn’t waste it. Well, “almost” wasted it. “Nearly” wasted on an interception with four seconds left in regulation but a blocked field goal kept the dream alive. “Tried” to lose it in the first of three overtimes but a penalty on a missed field goal – on “it” no less – gave it another kick. It went through and again gave them new life.

There were others along the way … a “pick six”, giving up the final 31 points in regulation, et cetera – but the bottom line is somehow the Bearcats managed to persevere. They in turn beat Warner Robins 47-41 to win the Class AAAAA championship in what was quickly deemed the best title battle ever.

That whole second chance and not wasting it became clear quickly. Bainbridge, as most know, lost 38-0 to the Demons the first time they met. (And oh by the way, that made them 3-5 at the time – they won seven-straight to finish out the year.)

This time it appeared they might return the favor. For starters, they held Warner Robins to four three-and-outs to start the ballgame while jumping out to a 28-0 lead.

The last of those stands led to the Bearcats’ first score. It came on a block of Samariy Howard’s punt attempt that took the perfect one-hop bounce to Anthony Brooks at the 25. He ran it left, made the sidelines and took it from there. Caleb Harris’ kick made it 7-0. That was at the 2:59 mark of the first quarter.

No chance to punt on the Demons’ next possession. That’s because Bryce Worthy intercepted Dylan Fromm at the 32. He too found the sidelines and the endzone. Harris made it 14-0. Only 14 seconds elapsed between the first and second score.

It would get worse. 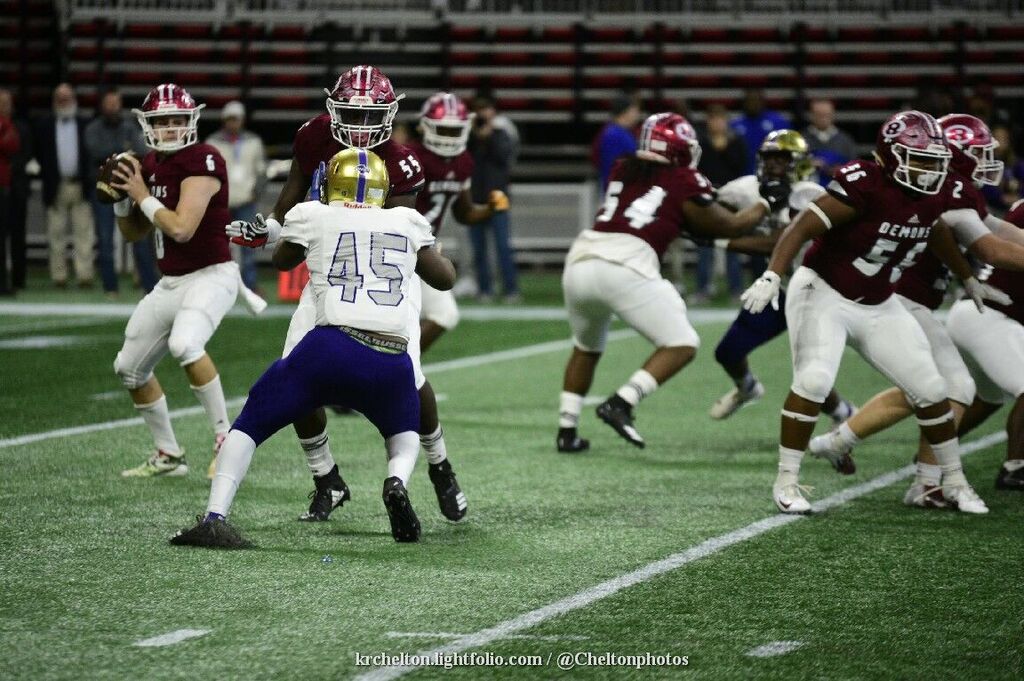 Bainbridge forced a fumble out of Fromm on Warner Robins’ next possession. They recovered on the 24. On the first play from scrimmage, running back Caleb McDowell threw a jump ball to Aaron Spivie in the right corner of the endzone. (McDowell was a threat on both offense – 20 runs for 71 yards – and defense.) Despite the double coverage, he was able to come down with it. Harris made it 21-0.

Following another three-and-out – the aforementioned fifth – the Bearcats forced the Demons to punt again. That led to a three-play drive – a 48-yard pass from McDowell to Aaron Spivey being one of those (he caught two for 72 yards in the first half) – and a nine-yard touchdown run by McDowell. Harris’ PAT made it the aforementioned 28-0 with the game just over a minute into the second quarter.

Warner Robins, which finished with 367 total yards to Bainbridge’s 183, began the long climb back in it from there.

It started with a six-play, 74-yard drive that was capped off by Jahlen Rutherford’s four-yard run. That came with 5:23 left in the second quarter. Samariy Howard’s point after made it 28-7.

It appeared the Demons would score again following, but after forcing the Bearcats to punt and moving it from Bainbridge’s 42 to the 31, it was flagged for two holds and an illegal procedure. That was that and after a few snaps by the Bearcats when they got the ball back, so was the first half.

Bainbridge might have scored on a kickoff return to start the third if not for kicker Cary Payne making the touchdown-saving tackle at the Demons’ 48. Bonus in the fact Warner Robins kept it from scoring, but not so in the fact Fromm was picked off again – the ball skipping off of receiver Marcayll Jones’ hand. That turned into the second pick-six and a 35-7 lead.

If Rome taught anything, it was how the Demons would play with their backs against the wall.

Demarcious Robinson’s interception went 46 yards and got Warner Robins to the 19. Jahlen Rutherford – 22 carries for 72 yards – ran it to the 9 where Fromm hit Jones with an over-the-shoulder pass and the touchdown. Howard made it 35-14 with 7:30 left in the third.

An onside kick – recovered by Payne no less – gave the Demons the ball right back on their own 49. They were eventually forced to punt, but it at least enabled them to pin Bainbridge on the 2. Which is where they were after three plays. They punted. That set up great field position for Warner Robins again, this time on the 30. It took seven plays, but the Demons got it in – Rutherford on a one-yard run. Howard made it 35-21. Momentum was all-Warner Robins.

They forced the Bearcats to punt again. They went 78 yards on nine plays and scored again. The last of those was a reverse to Tyler Fromm who in turn passed back across the field to Dylan who fought his way in from 12 yards out. Howard made it 35-28 with eight minutes left in the game.

Again Warner Robins – a little payback from the first quarter – saddled Bainbridge with a three-and-out. The snap was bobbled on the punt. The kicker was smothered. The Demons took over on the 5. To Bainbridge’s credit, it did hold – see “almost” wasted it. The bad news was it was pinned to the 2 after a fourth-and-two stop. The Demons again held forcing a punt. That gave Warner Robins great position again – something it also didn’t have in the first quarter – on the Bainbridge 41. Fromm hit Jones on the 26 to start. After a run went for nothing and a pass sailed incomplete, he hit Jones again, this time at the 5. He found Jones at the 2 and then finished it off with a pass to Ty Carr in the endzone. Howard’s PAT made it 35-all.

The Bearcats took the kickoff on the 27. They ran it once and then with 19 seconds went for a long pass. It was intercepted by Ke’Shawn Duvall. He ran it 28 yards to the 17. Warner Robins attempted two pass plays but were unsuccessful in getting it in the endzone. With six seconds left, Howard came on to attempt a 27-yard field goal. It was blocked. 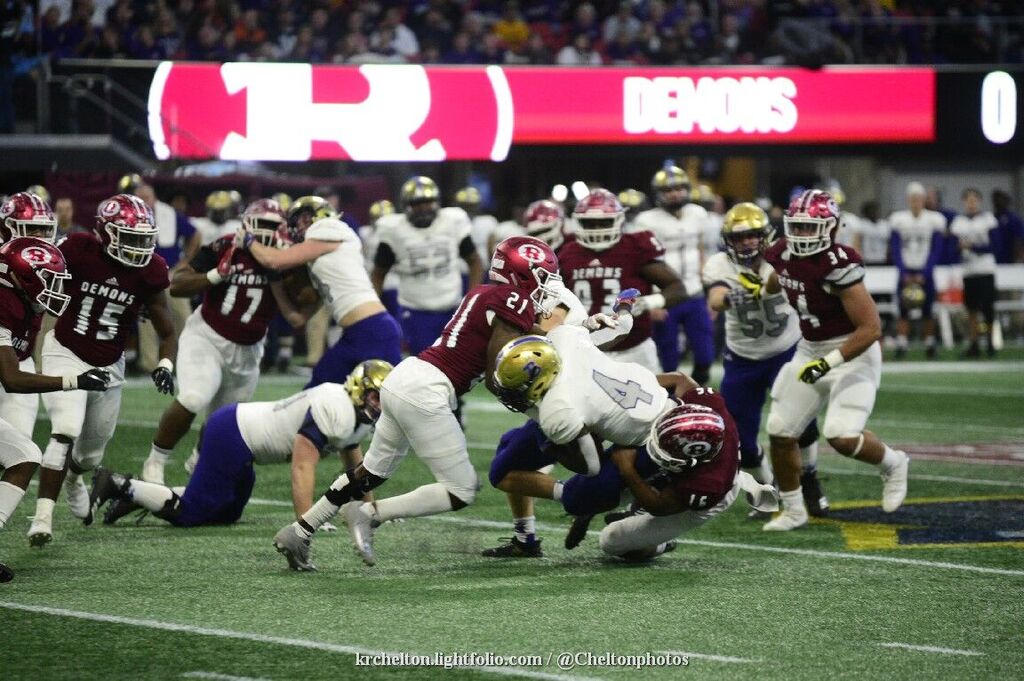 Bainbridge began – overtime rules putting the ball on the 15 to start each attempt. It went three plays, gained little and Harris kicked a 37-yard field goal.

Warner Robins got it to the 4 on the first play from scrimmage – Fromm to Jones – but couldn’t punch it in. Howard came on and kicked a 22-yard field goal.

The Demons started first. Fromm’s first pass attempt was blocked. The second went to Jones, to the 5 and gave them a first-and-goal. Again Bainbridge held. Howard kicked a 20-yard field goal. That was actually the first time Warner Robins led, 41-38.

Bainbridge looked terrible – went backward – on that possession but were still able to tie it on Harris’ 34-yard kick.

The Bearcats started it. They got a run to the 6 from McDowell. A second run yielded nothing and then quarterback Quayde Hawksin faked a handoff to McDowell. The defense bit. That enabled Hawksin to battle his way in from the right side. The two-point conversion – mandatory to attempt at that point – failed.

The Demons’ attempt to answer went as follows. Rutherford ran it to the 7. Rutherford was pushed back for a one-yard loss. Fromm was sacked back to the 16 and on a fourth-and-10 his pass went high and out of bounds finally giving the win to the Bearcats. 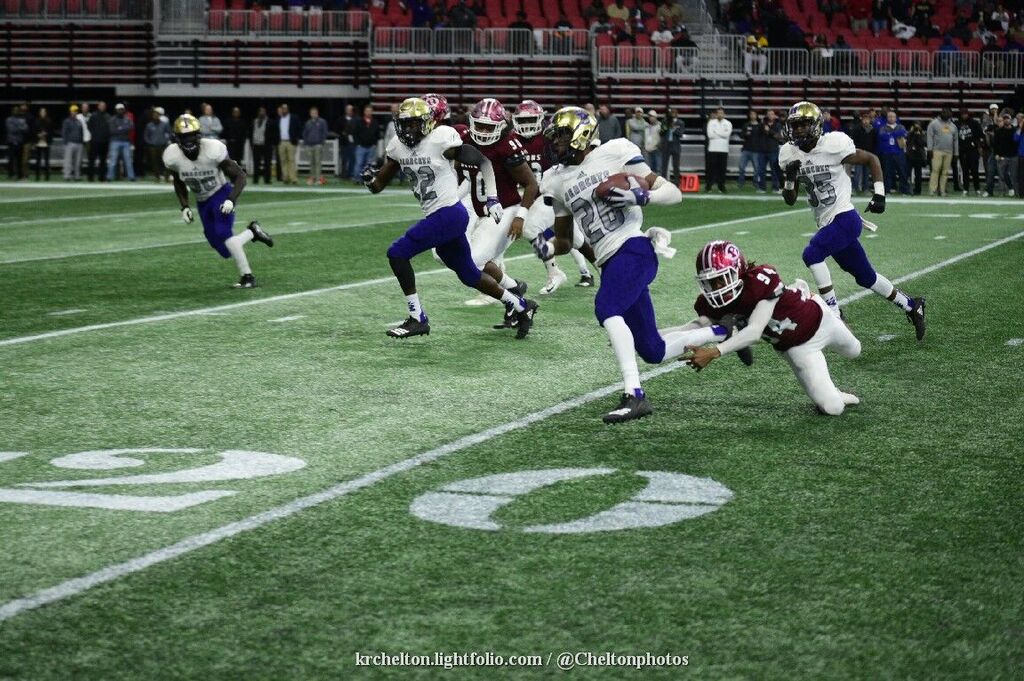 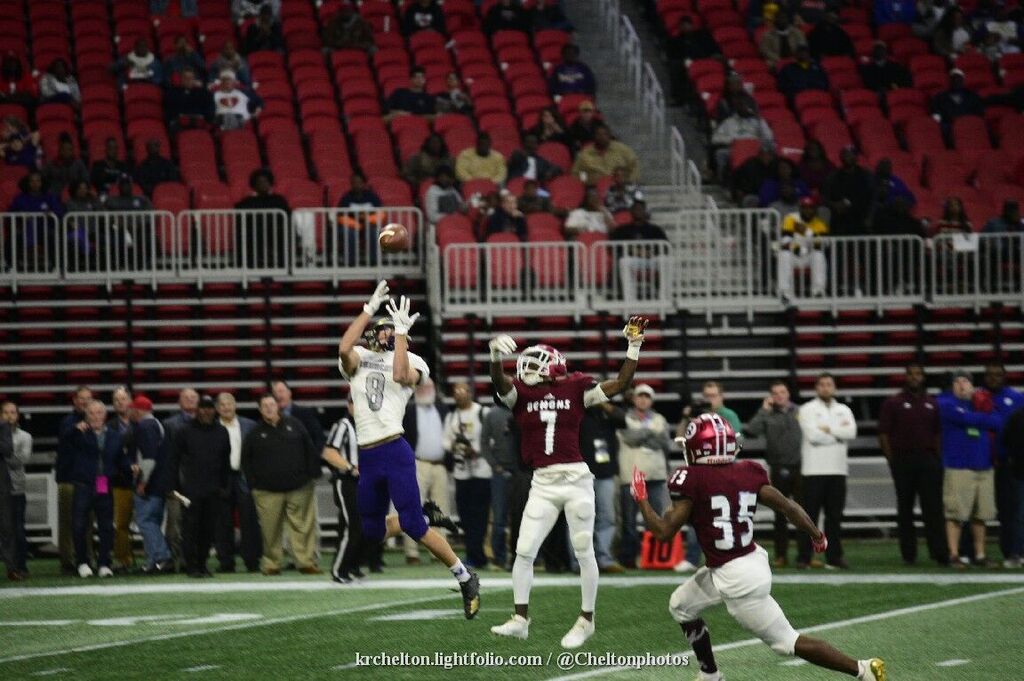