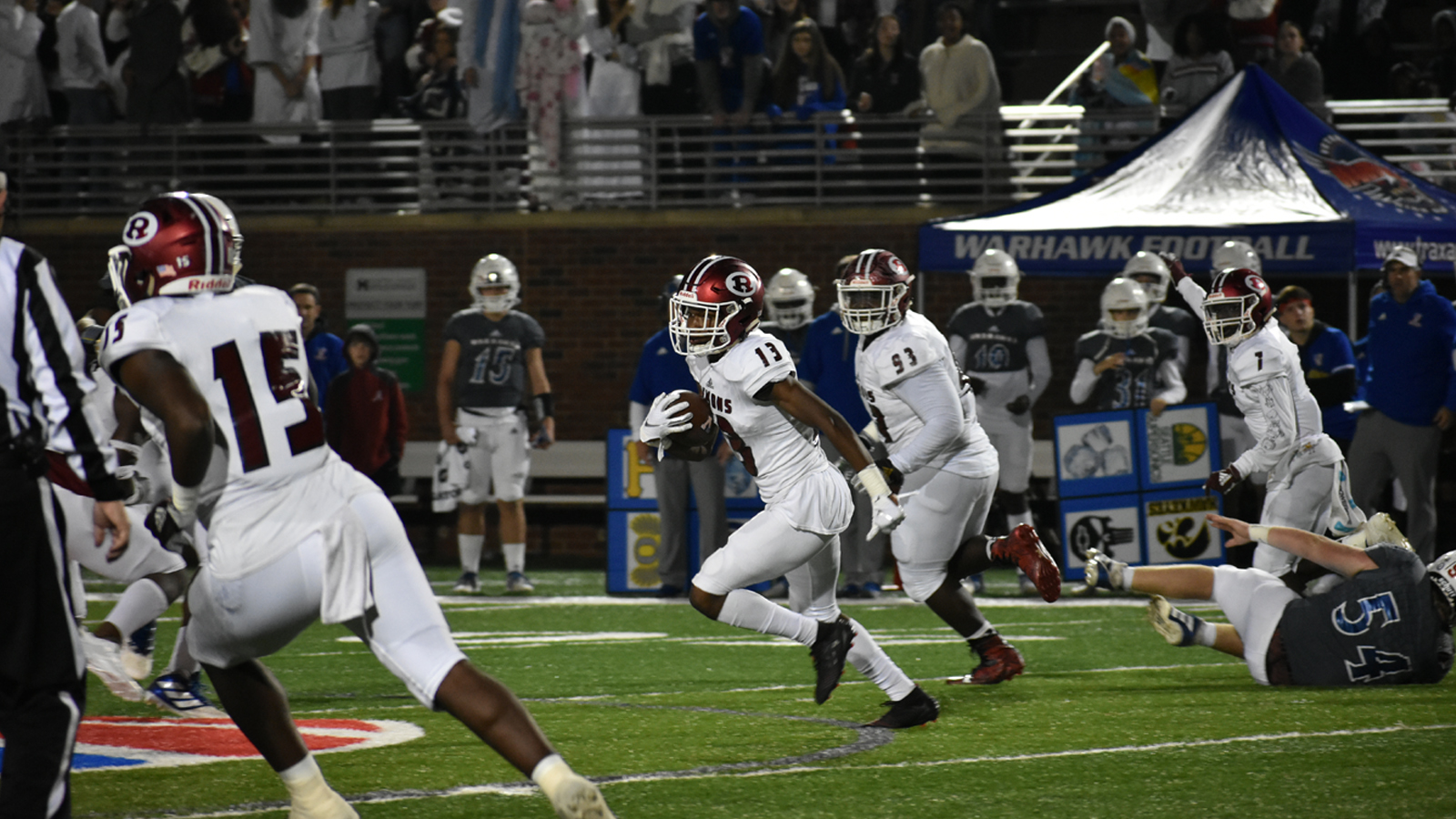 History will have to wait. For Veterans that is. It came in, seemingly at even odds with Warner Robins on paper – record-wise both 8-1 overall and 3-0 in 1-AAAAA – and with what appeared an even chance to not only win its first region title, but to get its first win over the Demons and earn its first nine-win season.

Instead it was Warner Robins continuing to make history, notching its 27th region title, and third straight, in dominant fashion, 47-17.

The Demons piled up 562 total yards – 270 on the ground and 292 in the air – while jumping out to a 20-3 halftime lead and increasing that to 26-3 before the Warhawks were able to score their first touchdown.

Veterans managed just 216 total yards – 78 on the ground and 138 in the air. (The “dynamic duo”, as described by Warner Robins Head Coach Marquis Westbrook of Lebron Fields and Julian Barnes – more than 1,600 yards between them – was held to just 21 yards in the first half.)

Marcayll Jones, seeing wildcat action at quarterback for the second-straight game, put the Demons on board first with a five-yard run. That capped off an 80-yard game-opening drive that went for 12 plays.

The Warhawks missed a 56-yard field goal attempt on their first possession but made one of 33 yards, via Daniel Gibbs, on their second. That came just before the end of the first quarter. 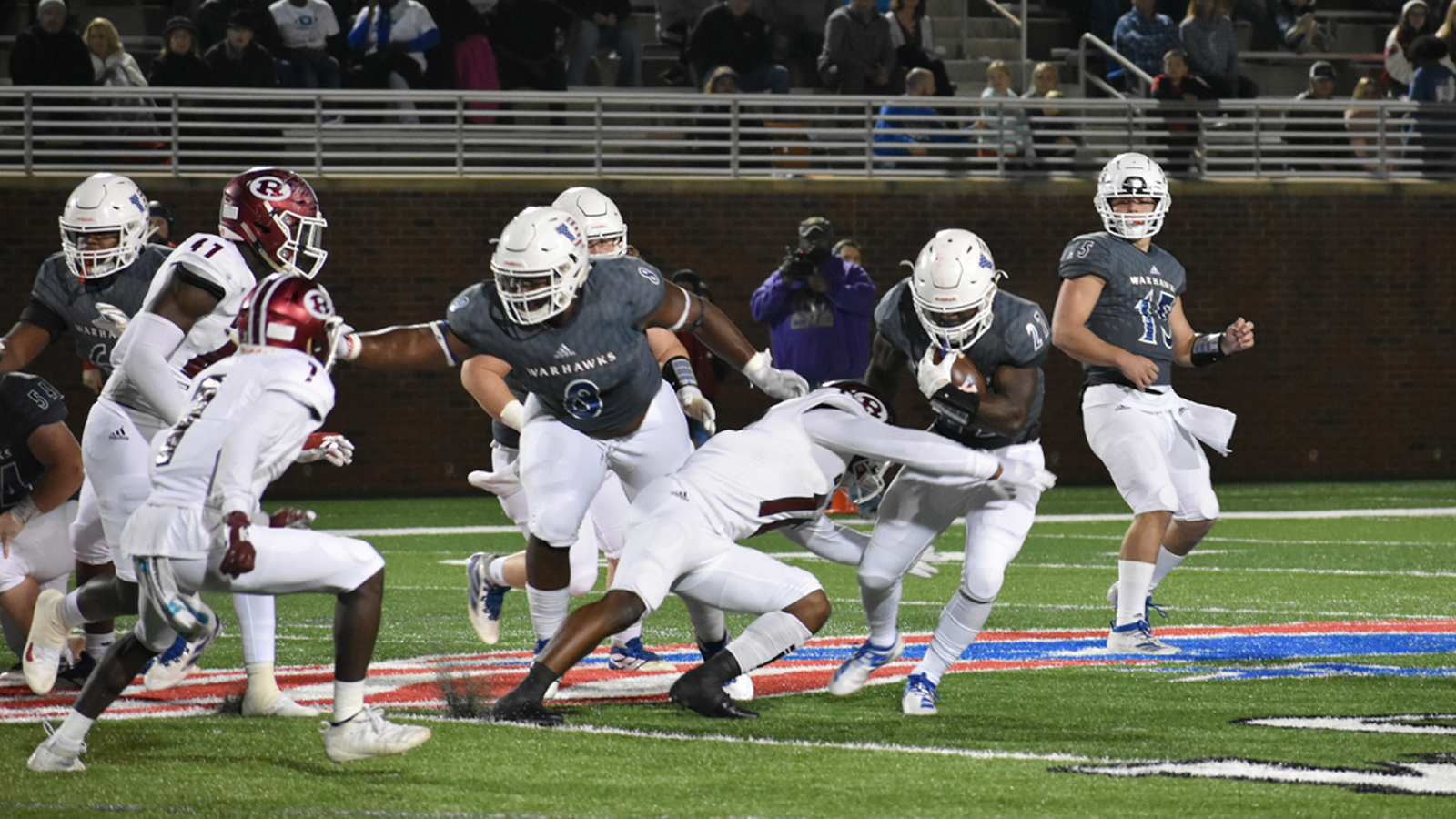 Armon Porter and quarterback Jalen Addie hooked up twice for scores in the second quarter. The first was from 13 yards out and took care of a five-play, 69-yard drive. The second was for 80 yards on a possession that needed just four plays to go the 90 yards necessary. Daniel Barber, who handled most of the point after duties on this night, made the first point after but missed the second. That made it the aforementioned 20-3 and following a punt by both, brought it to the half.

Veterans received to start the third quarter, made a couple of first downs, but then was forced to punt.

Warner Robins then went 69 yards on nine plays and scored on Jahlen Rutherford’s 22-yard run. The Demons went for two but were unsuccessful.

Both punted before the Warhawks put together a four-play drive that went 41-yards and was finished off by a 23-yard pass from quarterback Blake Ethridge to Nate Boehm. Gibbs’ point after made it 26-10.

It probably kindled a small flame of hope, but if it did, it was quickly extinguished by three straight scores by Warner Robins.

The Warhawks, with about five minutes left and both sides bringing in some fresh legs, scored after gaining a short field on a muffed punt.

Both of course, as No. 1 and No. 2 seed, respectively, will host the first round of state next week. 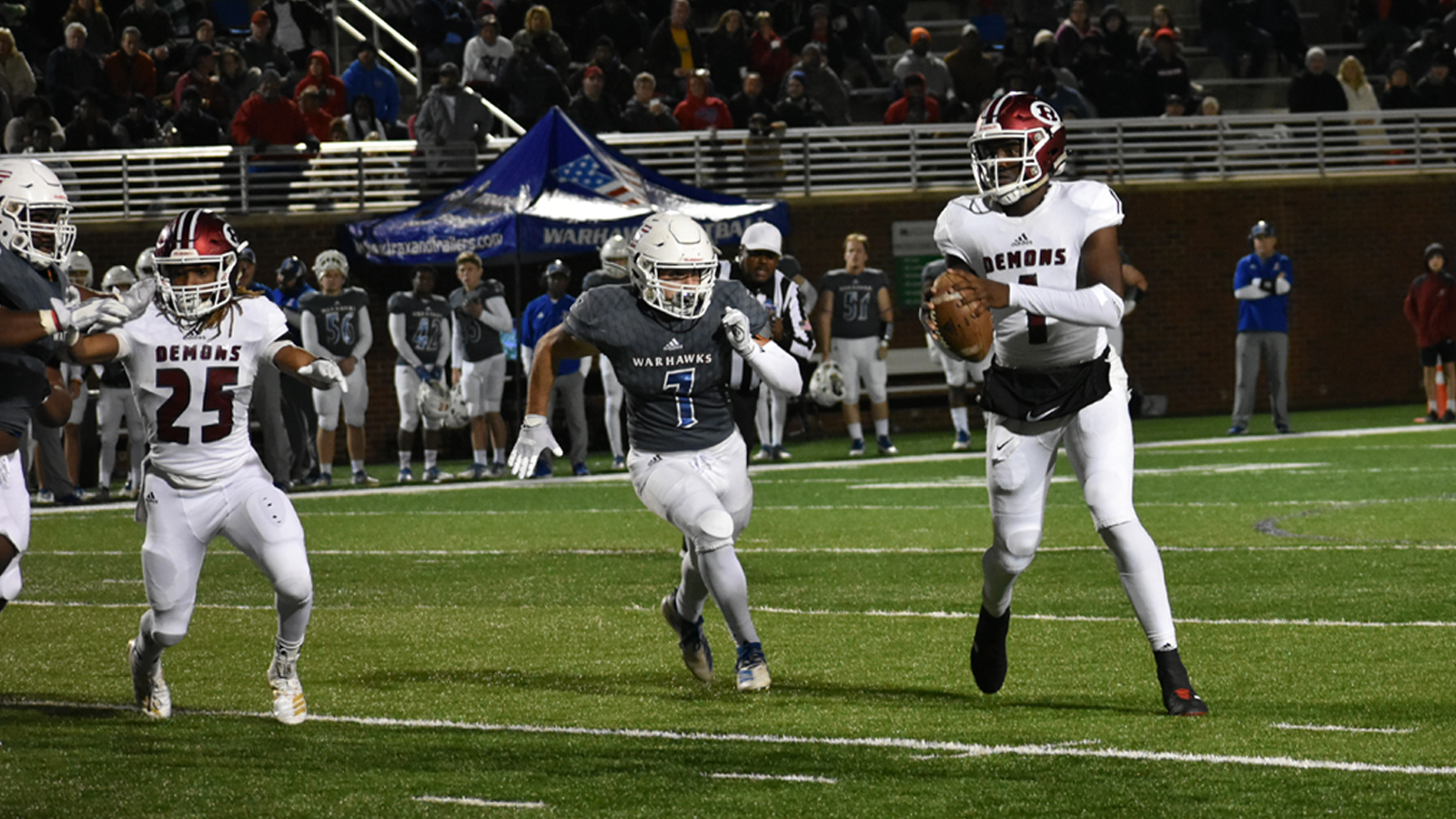 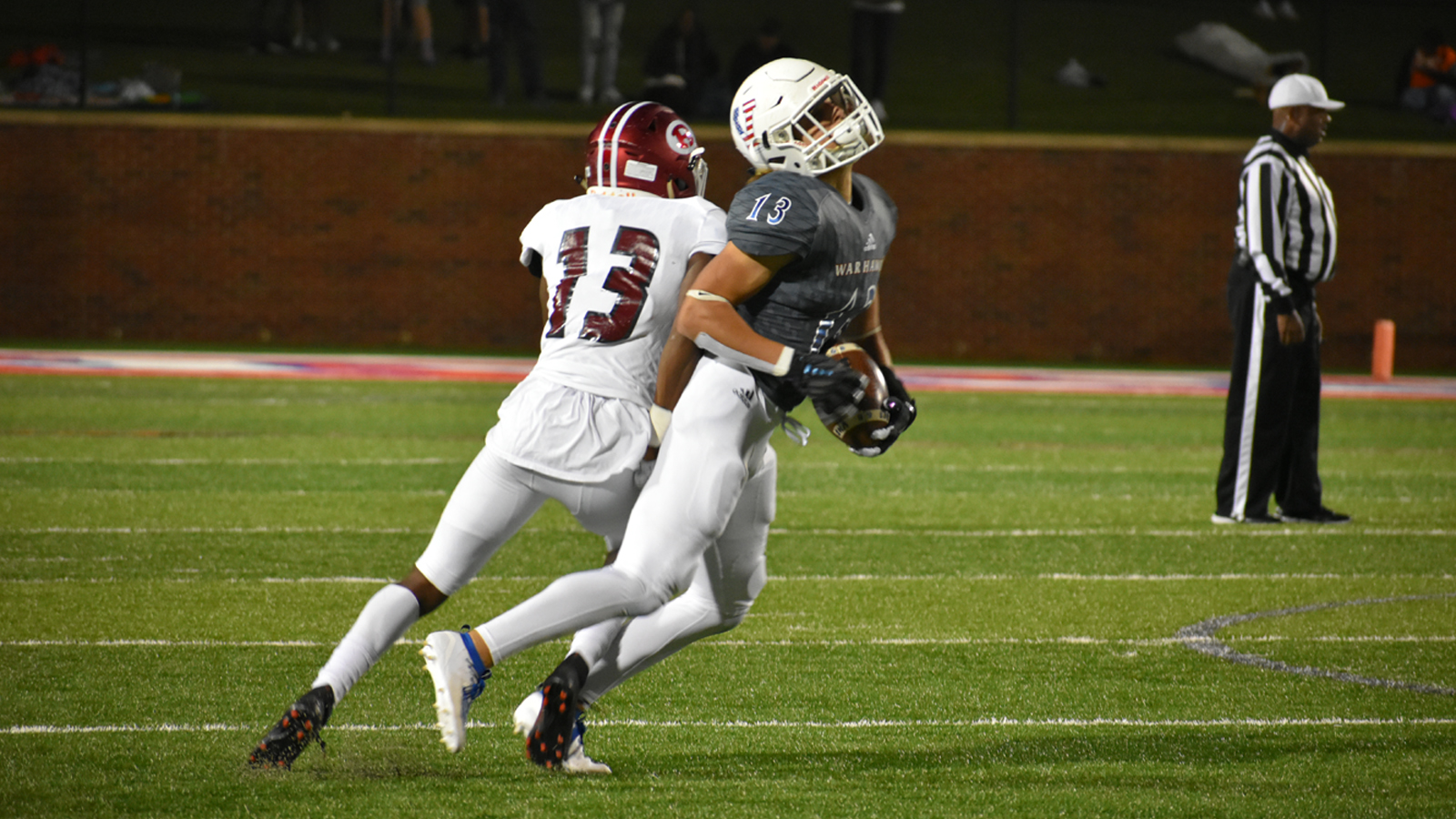 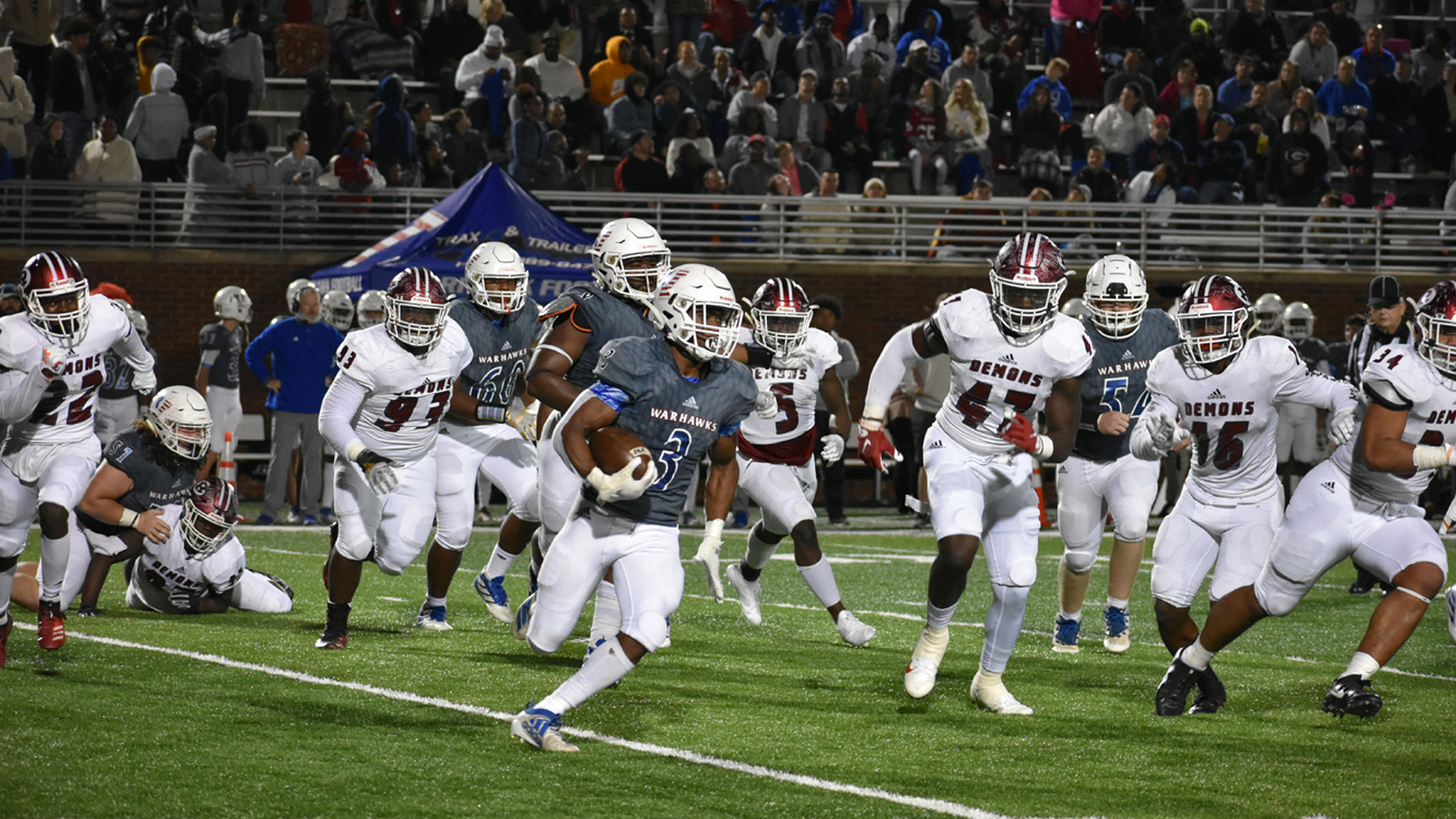