Demons roll past Greyhounds, back into championship game 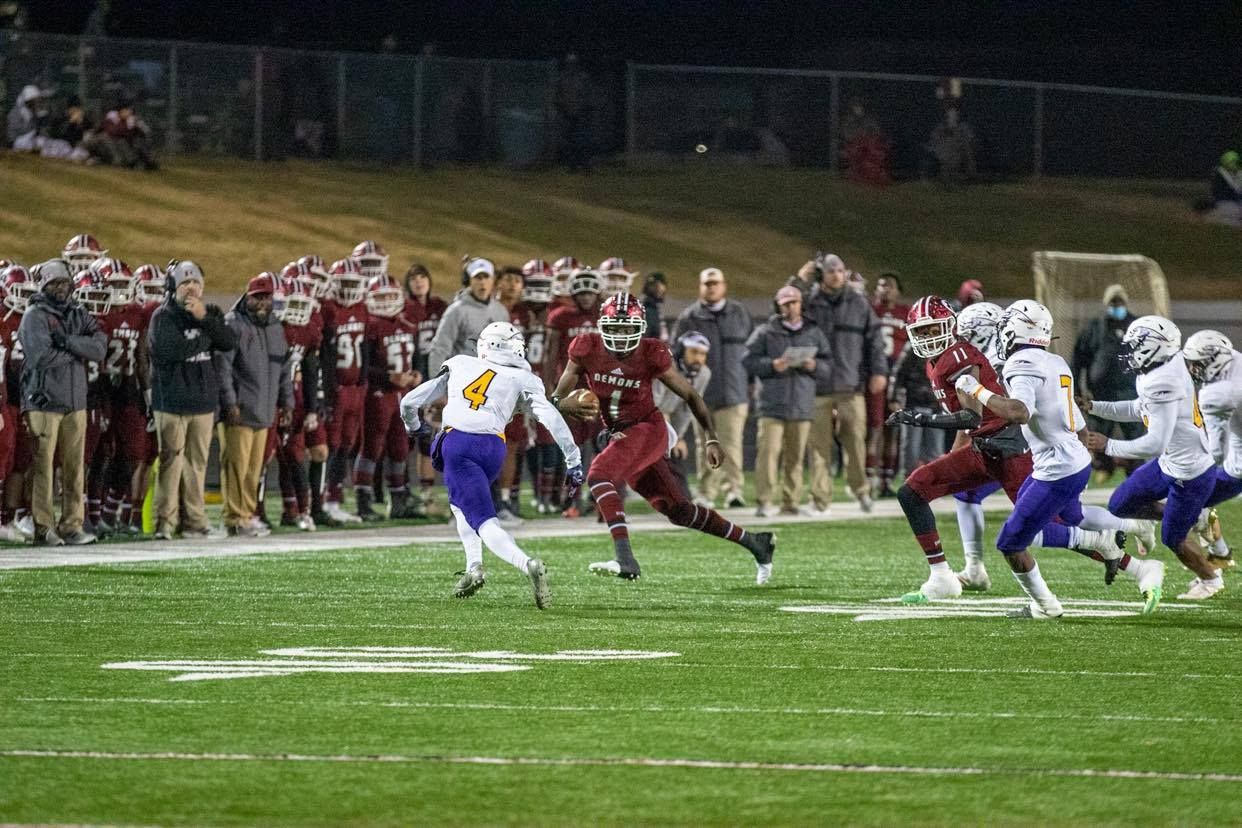 Warner Robins was unstoppable. Literally. The Demons started six drives in the first half. They scored a touchdown on all of them. They led 14-0 after one, 28-0 midway through the second quarter, 42-14 at the half, and went on to win 56-21.

All told, Warner Robins started 10 drives. It scored on eight of them. One was negated by a touchdown and the last really didn’t qualify as a drive as it started with just over a minute left to play and with a running clock. The Demons picked up a first down on the first play from scrimmage and was able to take the knee following.

The win earned Warner Robins its fourth straight state finals appearance. It will take on Cartersville, a 24-17 winner over Coffee, in the championship game Dec. 30 in Georgia State University’s Center Parc Stadium. The Demons will enter that matchup 12-1. The Hurricanes are 13-1. 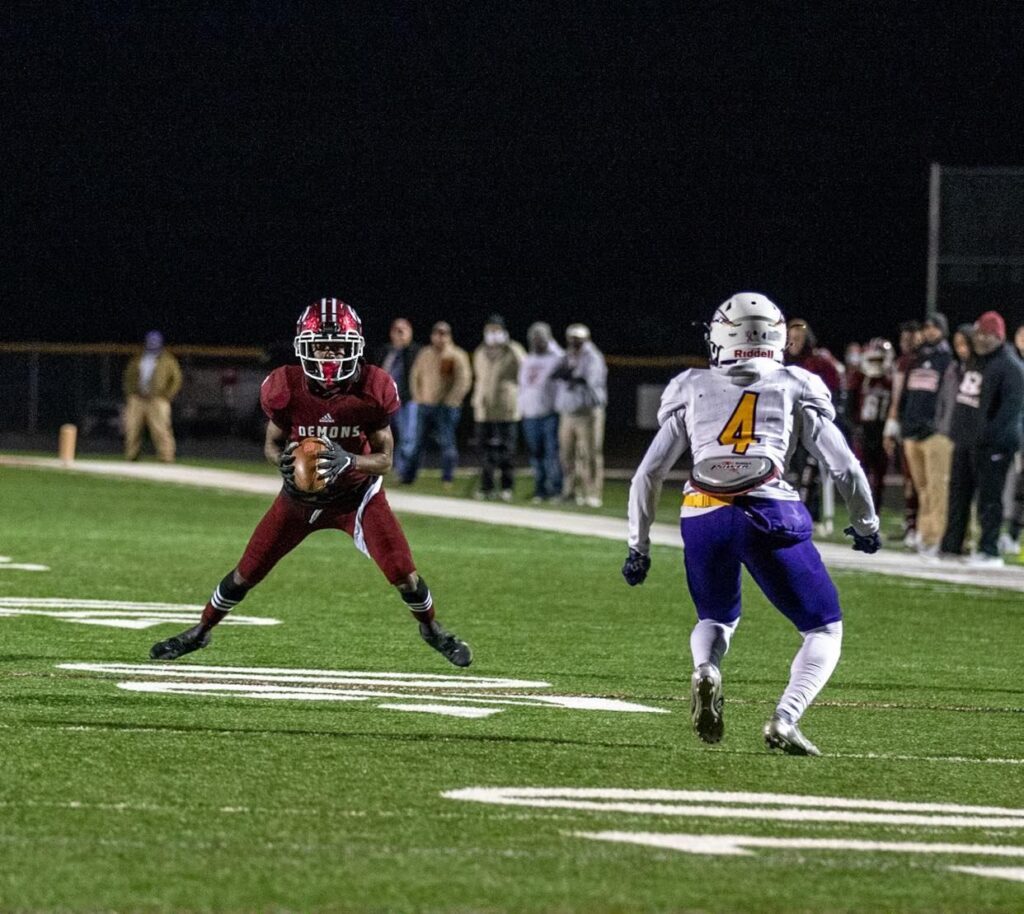 At first it looked like penalties would play a role in deciding the winner the Demons and Greyhounds. Jones County was flagged for two on the opening kickoff. That made for a drive starting on the 7 versus where the runner was brought down, the 31. The Demons returned the favor partway through. Both resulted in first downs, one of which gave them an extra set of downs instead of having to punt. Still, it didn’t hurt as Jones County eventually turned it over on downs after failing to complete a pass on fourth-and-11.

That’s when the onslaught began. (Well, after the Demons overcame one more yellow hanky on the drive – it temporarily overturning a touchdown.)

Warner Robins scored first on an 11-play drive. It began on their own 44 – a 25-yard run on the first play from scrimmage by Jahlen Rutherford got it started – and ended on a five-yard run by quarterback Jalen Addie. Daniel Barber made the point after … and continued to do so eight more times. Also, Rutherford was only the first of six Demons to score at least once.

Warner Robins’ second drive went 59 yards. It took only three plays, the last of which was a 59-yard pass from Addie to Armon Porter. That came with just over a minute left in the quarter. Addie finished the first half 12-13 for 245 yards in the first half. Warner Robins also rushed for 109 yard on 15 carries. They did at least as well, or better, in the second half. Greyhounds quarterback John Alan Richter was 7-17 for 109 yards and the team as a whole only had 34 yards rushing. They did do much better in the second half, but it mattered little.

Jones County actually got two tries on its third possession of the game. That’s because its punt touched a Warner Robins player. It recovered on its own 38, but still was eventually forced to punt.

It did appear to at least “flip the field”. That is until Jahlen Rutherford scored from seven yards out and capped off a nine-play, 87-yard drive.

The Greyhounds were unable to convert a fourth-and-one on their next possession. Warner Robins scored again following. It only took two plays this time, the last a 35-yard touchdown pass from Addie to Kaleb Howard.

Jones County got on the board following via a three-play drive that went 81 yards. It was capped off with a 81-yard pass from Richter to Maleek Wooten.

Porter scored his second touchdown after that, 40 yards and the finish to a four-play, 81-yard drive.

Again, the Greyhounds answered. Theirs was on a seven-play of 56 yards. Richter hit Austin Barnes from eight yards out to score on it. Evan West made Jones County’s points after.

Finally before the half, Addie found De’andre King on a pass from the 6. That was the finish to a four-play drive that started on the Demons’ 46. 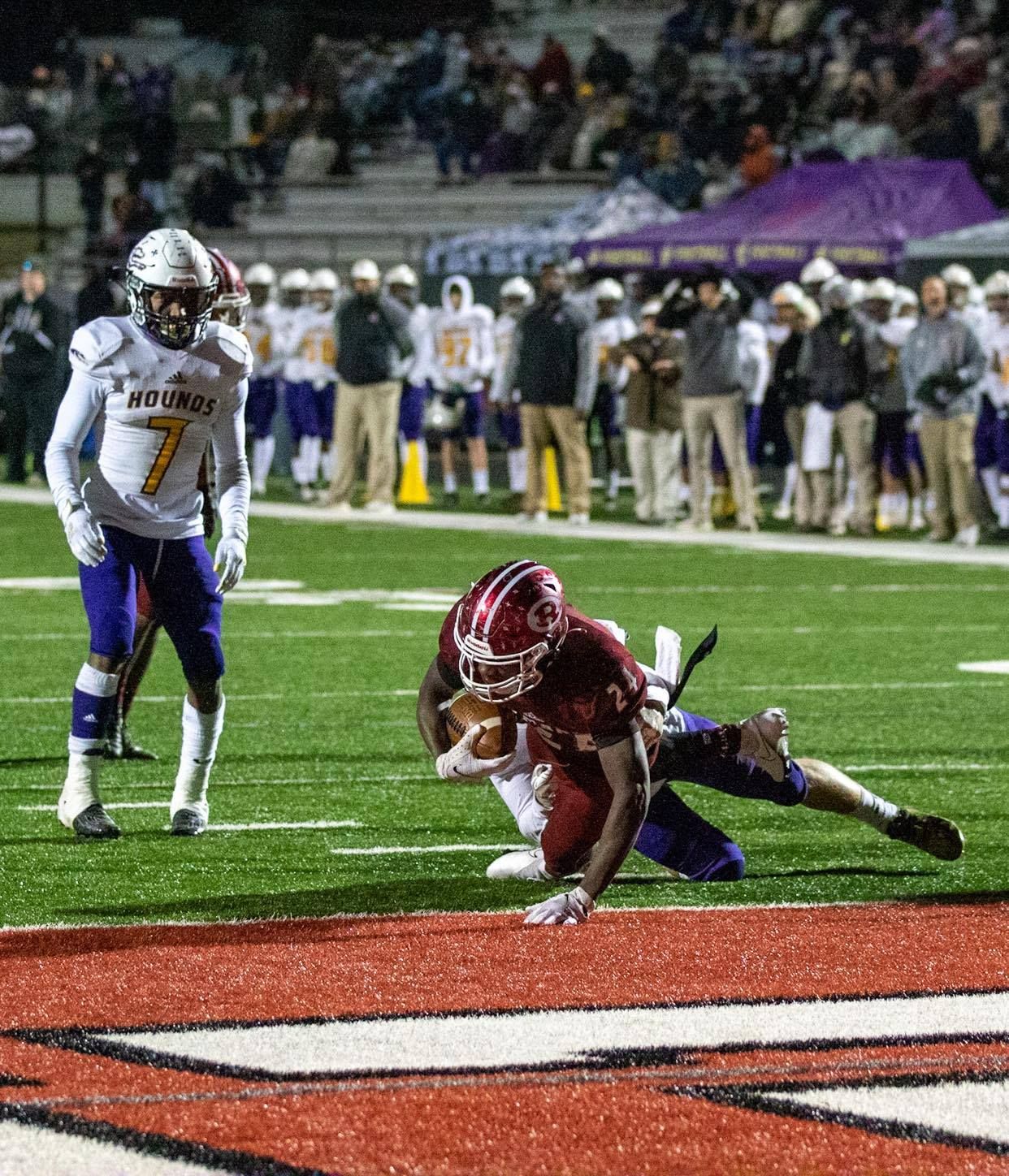 Warner Robins took right up where it left off – actually, looked even stronger – on the first possession of the third quarter. It started on the 20 and went the distance in five plays – in less than two minutes to boot. This time Addie found Malcolm Brown for the score from six yards out.

The Greyhounds answered with a seven-play, 74-yard drive finished off by a seven-yard run by Andrew Carner. He, the Greyhounds’ top runner, was held in check for the majority of the night.

The Demons’ final score came on the heels of that. Rutherford scored again from the 6 to make it the final. It was the end to a 10-play drive that started on the Warner Robins 23 and came with 3:45 left in the third.

Jones County, after moving it to the Demons’ 7, came up short on a fourth-and-five. Warner Robins, with a backup quarterback and plenty of subs, threw an interception. The Greyhounds punted. The Demons ran out the clock. 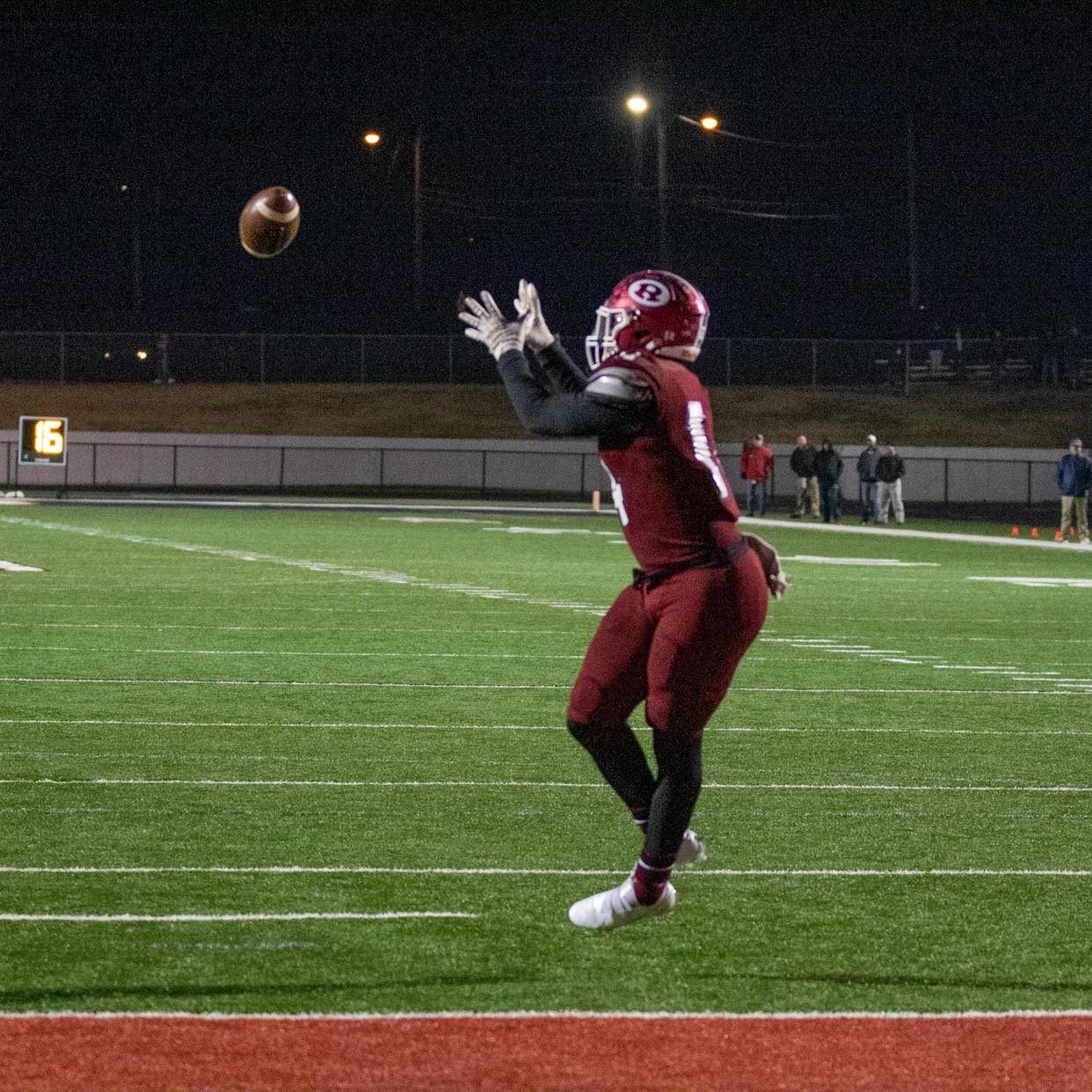 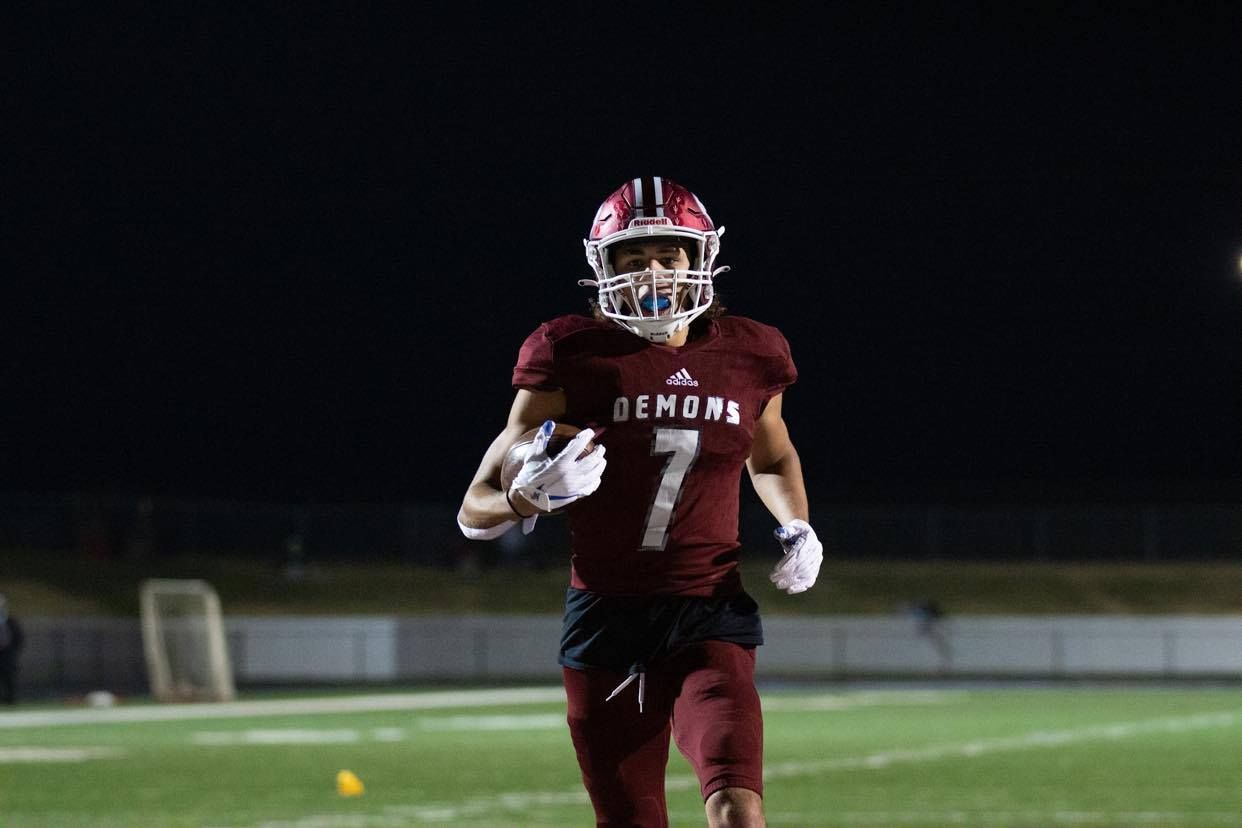