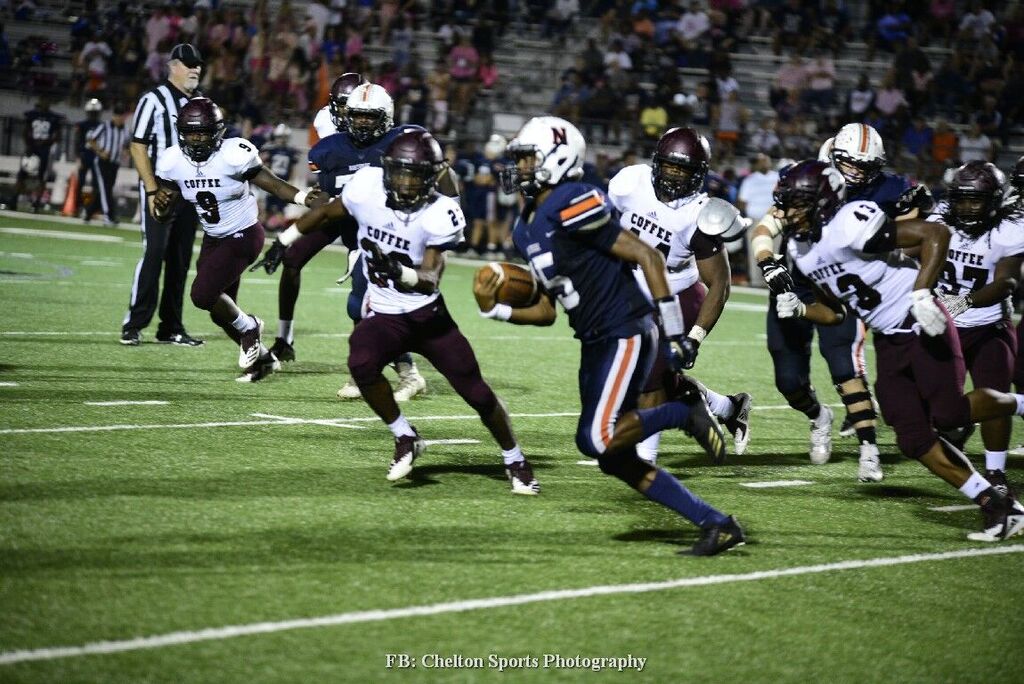 The 2018 Northside Eagles are in unchartered, chartered, territory once again. Tuesday will be the seventh time that the Eagles have played in a State Championship game, having won three out of the first six tries. The last time they played for all of the marbles they came from behind after trailing at the half, and defeated the Mays Raiders 25-18. That was in 2014. They finished  14-1 that year.

This year’s team has had its own share of adversity to fight through to get here.

The unchartered part of this equation is that Northside finished 5-5 in the regular season. That is the fewest number of regular season wins since the 1991 campaign of Stan Gann’s Eagles who went 3-7. Prior to that, you have to go back to 1970 to find the Eagles at 2-7-1, and the only other time the Eagles finished at 5-5 was 1969.

Overall, they have only finished at 5-5 or worse seven times in their 54-year history, including this year. Three of those years were the first three years that the school was open – 1964-66. None of those previous teams had a chance to be in the playoffs. Unchartered, for sure!

Kevin Kinsler, in his ninth year at the helm for Northside, may have done his best job of coaching in all the years that he has been the Head Coach. Certainly, the feathers have been ruffled throughout the season for a bird that is used to soaring high and mighty. Never has Northside been faced with more adversity in terms of a winning record, tradition and expectation. Not since Northside won its first state title in 2005. Yes there were those years when Northside was expected to win it all, 1999, 2001 and 2005, but didn’t. Those were actually the growing pains of becoming a perennial power. But once the bar was set with a title, no Northside team has had more reason to throw in the towel, accept mediocrity or start playing for next year. None of the players, nor coaches, nor the Head Coach choose any of those options.

This team has begun to believe in itself throughout the adversity and therefore has grown and began to jell. All five of the Eagles losses have been to teams that are playing for a state championship (3) or were ranked in the final top 10 poll of the year (2). Four of those five losses have been eight points or less, with the largest margin of loss being 17 points. They will play that foe, Lee County, in the state championship with an opportunity to avenge that loss. Be reminded, that four of the last five teams to play a team twice in the same year since 2015, with the second one being the State Championship game, the loser of the first game has prevailed. The lone exception was Lee County’s rematch with Coffee last year when Lee escaped with a 28-21 win in the Championship.

The defense of Northside has been playing its best since a 46-44 shootout loss to Valdosta in the ninth ballgame of the year. Since the opening playoff win against Tucker where Coach Chris Reeves’ unit gave up 21 points, the defense has been lights out, giving up 0, 6 and 7 points in the last three games. Not to mention the last seven came with two minutes left in the semifinal game against Dacula where the defense also held Dacula’s 1,000-yard rusher, Trenton Jones, to seven yards rushing. Senior Safety Deshaun Maine leads the team in tackles with 109 tackles. Maine, Senior linebacker/end, Jajuan Ferguson and Junior, DL, Nate Trevino all lead the team in tackles for losses with seven each. When these guys are playing well up front it leads to the strong players in the defensive back field to play well. In that secondary, Tubby McCall has 79 tackles/7 interceptions and Kentrez Anthony has 83 tackles/five interceptions. The front that has to put pressure and disrupt the Lee County offense is anchored by Senior DT, Lafredrick Chappell (37 tackles/1 for loss/2 int), Junior LB, Willie Northern (79tackles/2 for loss) and Senior LB, Mario Starling (76 tackles/4 for loss/1 int). This defense has set a school record with 20 interceptions on the year. If defense wins championships, then Northside couldn’t have picked a better time for the defense to be playing its best.

Offensively, Northside has been searching for the return of the execution of plays on that side of the ball for the last two years. Last year the Eagles scored 235 points which was the fewest amount of points per game (19.6) since 1996. This year Offensive Coordinator Lee Pope has the offense scoring and through 14 ballgames the offense has produce 453 points for 32.4 points per game. The emergence of the Region 1 Player of the Year, Senior, Jadin Daniels, has propelled the team to the position that they are in offensively. He has almost as many yards passing (125-205-14 td-8 int 1,565 yds) as he does rushing (206 car- 1,549 yds-17 td). Eric Smith (124 car- 769 yds-12 td) has provided a spark at tailback when he has been healthy. His injury in the Lee County game seemed to be one of the reasons that Northside loss at home to the Trojans by 17. His backup has done a great job of relief, Zikhyree Hill (83 car- 370 yds-5 td). A very versatile all purpose guy has been Daniel Neal from tailback (24car-175yds-2td) to WR (36 rec-607 yds-7 td) to kick off/punt returns (199 yds), he can do it all! Finally when Northside ends the drive with a kick it is Cory Munson who will usually pins the other offense deep with a punt (avg 41.1 yds per punt) or he will be putting it through the uprights for an extra point or a 3 (55-59 PATs and 12-17 FGs, 53yd long). Lee County knows him all too well, as Robinson returned one of those punts 70yds for a TD in the first game and last year Munson nailed a 57yd FG at Lee Co. to send the game to overtime tied at 10-10. 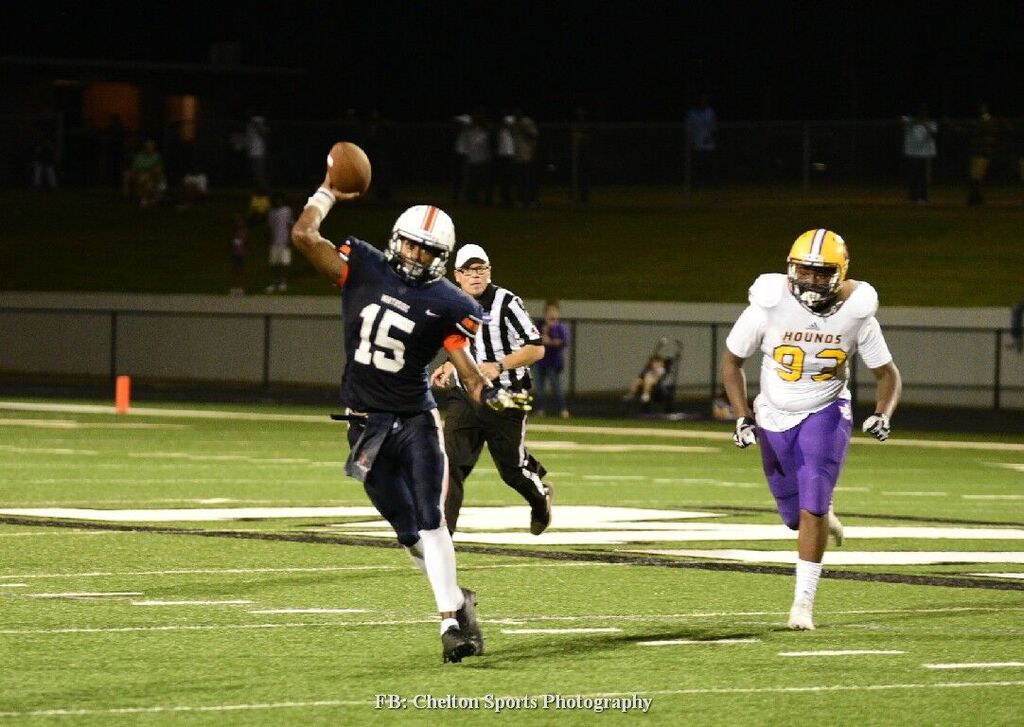 Lee County, ranked number 1 all year and the defending 6A State Champions brings in a stout challenge for the Eagles. The Eagles own the series won-loss record at 4-2, with Lee County winning the last two. The Eagles and Trojans have met in the playoffs one previous time, with Northside winning 41-0 in 2006 in the midst of Northside’s first State Championship campaign and during Northside’s back to back Championships of 2006 and 2007. It is only fitting that if Lee County is to capture a back to back Championship, they will have to beat a team that has done it and a team that comes from Region 1.

Lee County won the first meeting of the year in mid October 24-7, which is the closest contest of the year for the Trojans. Just a week after Northside held them to 24 points, they ripped the Valdosta Wildcats for a 63-7 victory. They have a few marquee players that make them special. Two transfers from Crisp County only added to the talent that Dean Frabrizio has assembled at my wife’s alma mater.

On offense, at Quarterback, Junior, Kyle Toole is the leader (128-197-22td-1int). He is proficient, he can get the ball down the field and he makes good decisions. The Trojans rushing attack consist of Senior, Shandarious Kimbrough (69car-400yds-12td), and Sophomore, Preston Simmons (87car-302yds-9td). Toole’s favorite target to throw to is Sophomore, Chauncey Magwood (27rec-453yds-1td), although he has a trio of other receivers that have 5 TD catches each, Daveon Sanders (23rec-351yds-5td), James Hopson II (14rec-312yds-5td) and Senior, Jeremiah Engram (16rec-278-5td). But, you can’t fall asleep and forget a guy who only has 2 td catches and has caught 15 passes of his own for 226yds, another Senior, Artavius Warren. As you can tell, Toole likes to throw and he has a plethora of receivers to toss it to.

Defensively, Lee County is as good as they get. They are disciplined, fast and play together as a unit. They don’t give up much in terms of rushing and they have the athletes that can cover you in the secondary. Their nose guard Anthony Harvard controls the interior and their linebacker Baron Hopson had a really good game against the Eagles in October. The Eagles will have to block well, eliminate penalties and sustain drives with points to win this game. The guy that can make the difference in the kicking game when in the open field is Senior, Jammie Robinson, a Strong Safety and Running back/returner. Their kicker is solid, Junior, David Beaver (54-54 PATs and 6-19 FGs).

This is going to be a great State Championship game. We know for the third year in a row that the State Champion in 6A football will come out of the best region in the state, region 1! Lee County is trying to go back to back for the first time in their history, but must go through a 3 time State Champion who has gone back to back itself. This is not the same Lee County team that years ago would beat a Baconton Charter 50-0 and then turn around and get waxed, itself, when playing stiff competition. A back to back Championship would only fortify the Trojans as a new perennial power in football in Georgia, Although it has always been known as a baseball school in the years past, thanks to the likes of Buster Posey and family. I will mention in the fall of 84-85, my wife’s senior year, the Trojans won the state in boys basketball. In the first meeting this year, Lee County’s QB Kyle Toole was (8-17-174yds- 1td- 0int), averaging 21.8 yds per catch and he is facing a defense that has gotten better and better and forced a record setting 20 ints on the year. With all that being said, this is also not the same Northside that finished 5-5 in the regular season and lost 24-7 to Lee County in mid October. It is the same Northside that knows how to fight for a state championship.

May the Eagles once again fly high and mighty! Go Big Blue!

On Sportmic.com on your Tablet, Iphone, Droid 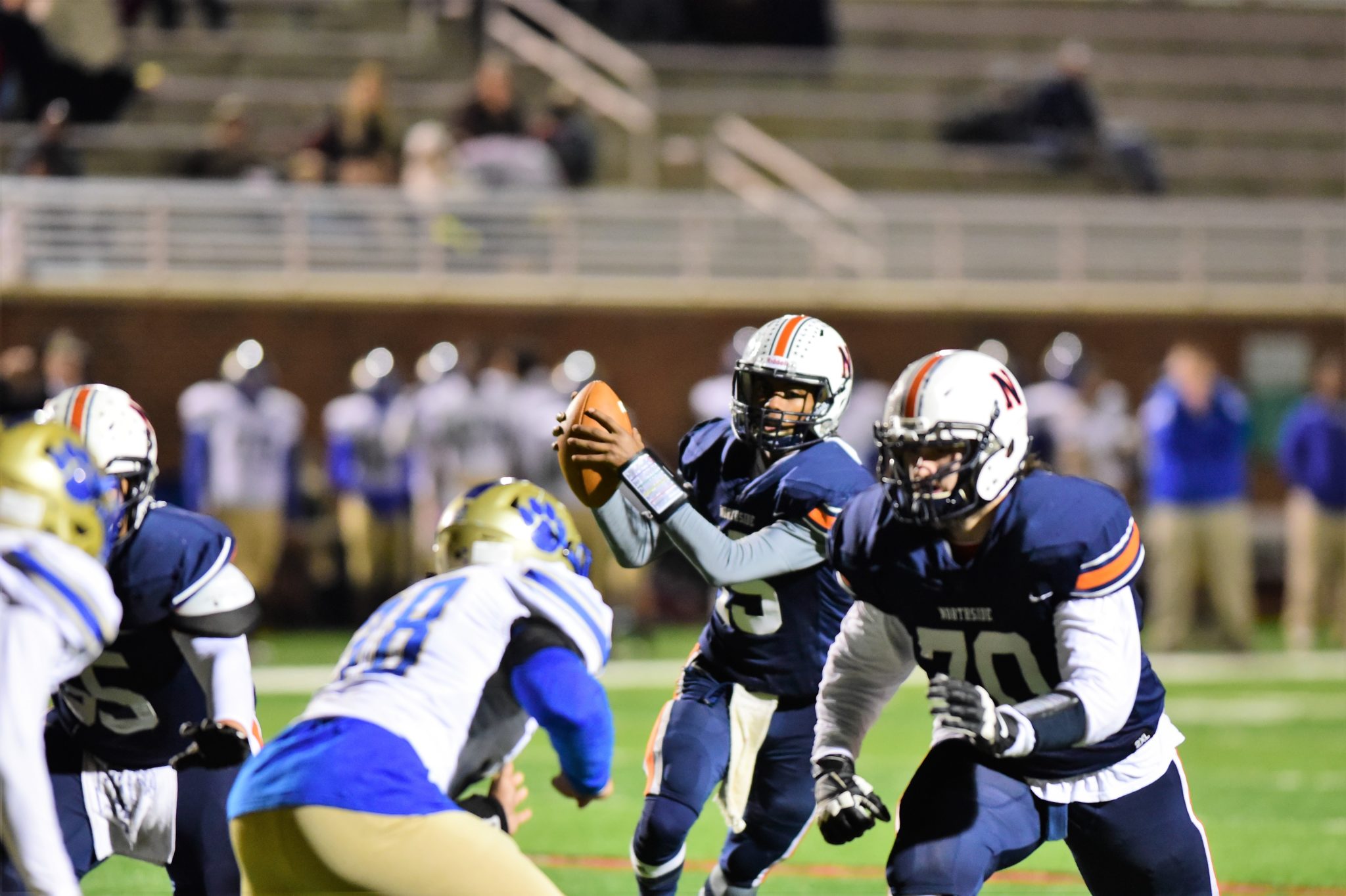