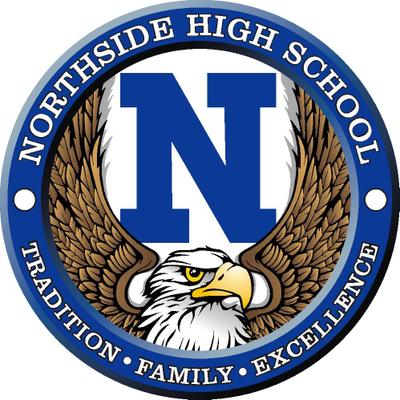 Story and photos by Kandace Pasko

Northside High School capped off its successful year by signing five athletes to football scholarships and to a track scholarship on National Signing Day, Wednesday. Head Coach Kevin Kinsler started off by assuring the other athletes: “The ultimate goal is not a scholarship. The ultimate goal is to compete, learn life lessons, work with other people, enjoy and make great memories. A college scholarship is just icing on the cake a select few get to enjoy.”

He went on to list the 33 players that are participating in sports across the country from Northside High School. Kinsler also spoke of the professional players Northside Alumni has that did not start off with a college scholarships. “Honor what you got, take advantage of it, and you come away with a degree, an education,” he encouraged. “Because that is the most important thing about this whole process.” 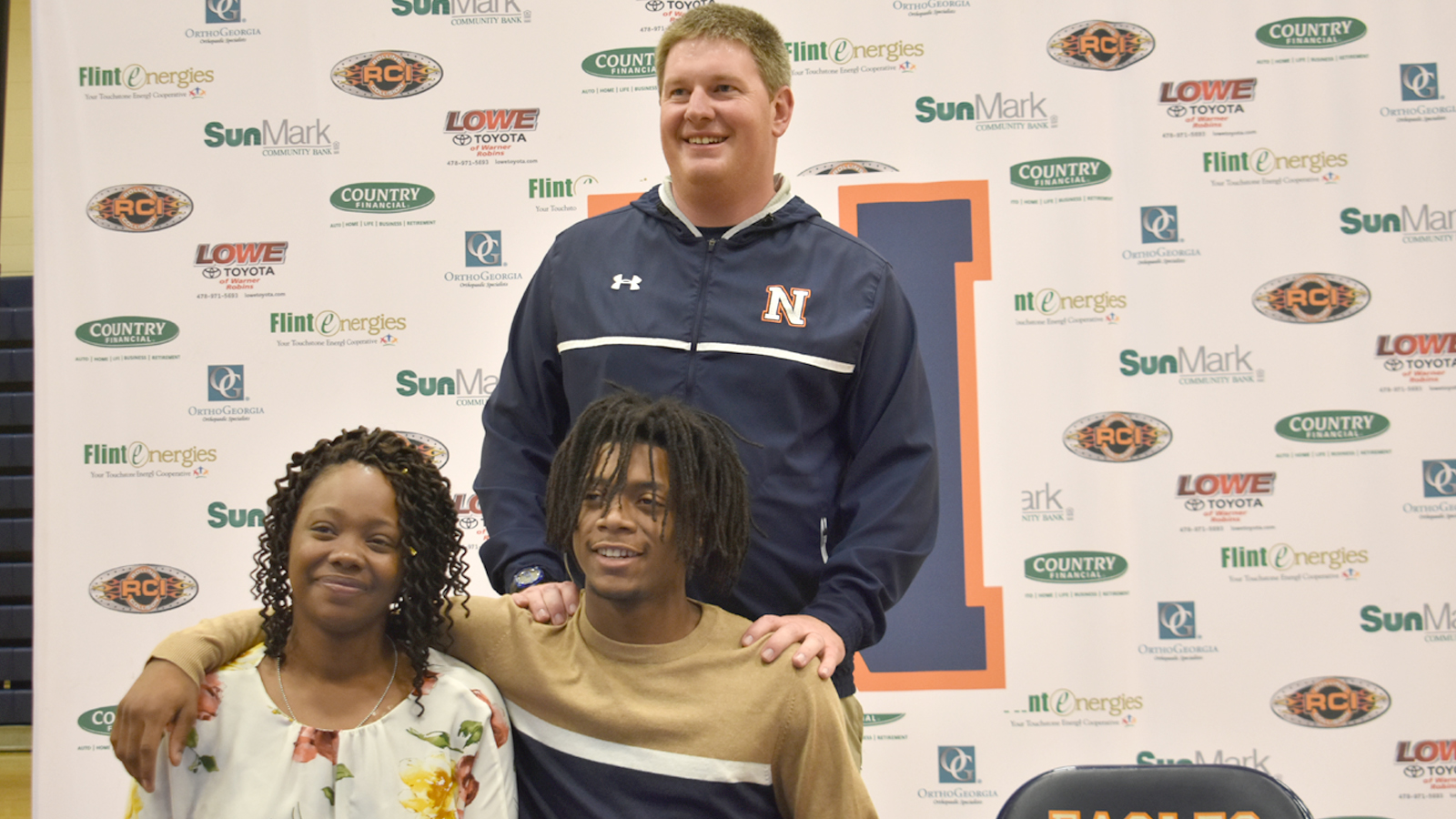 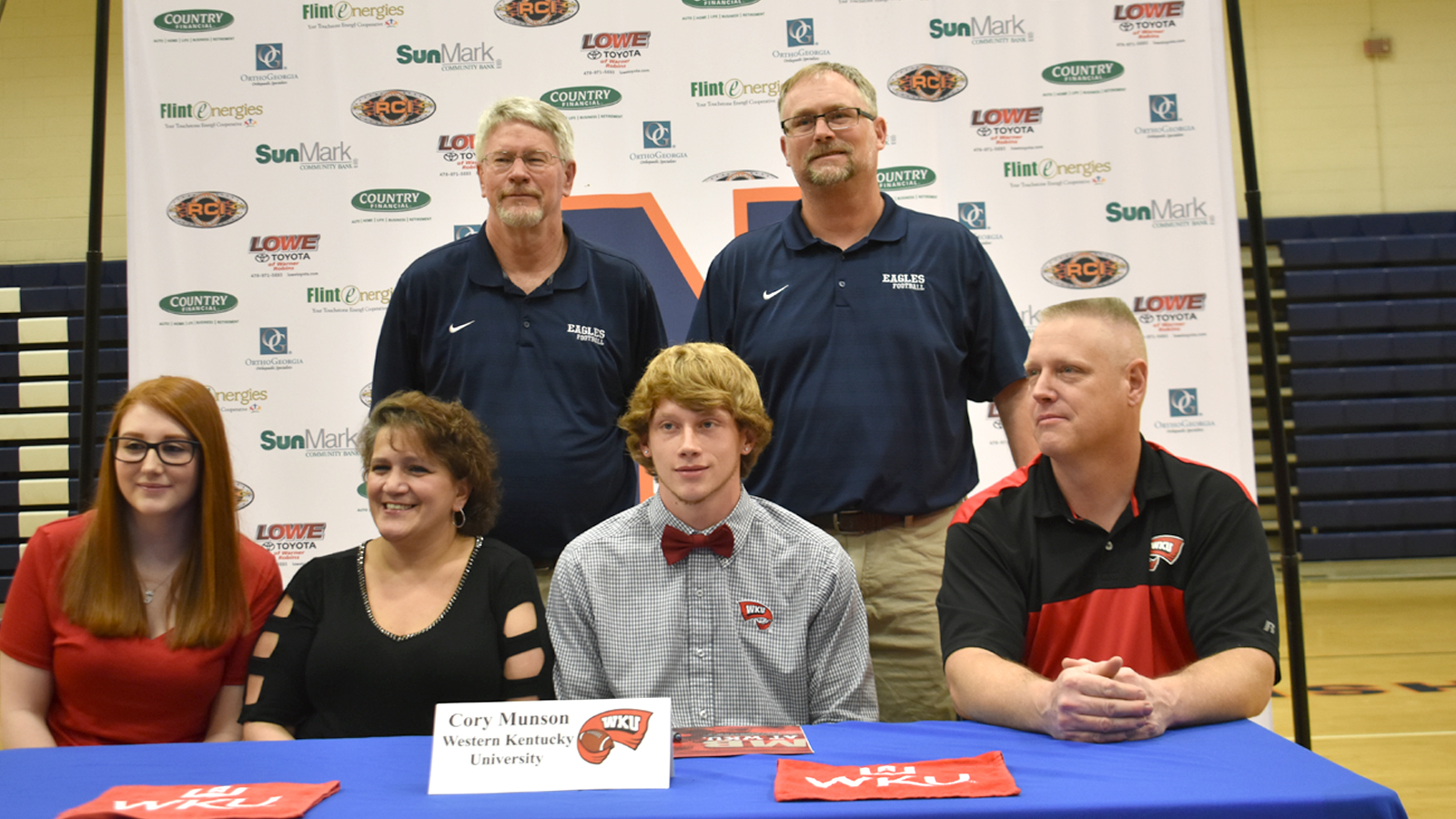 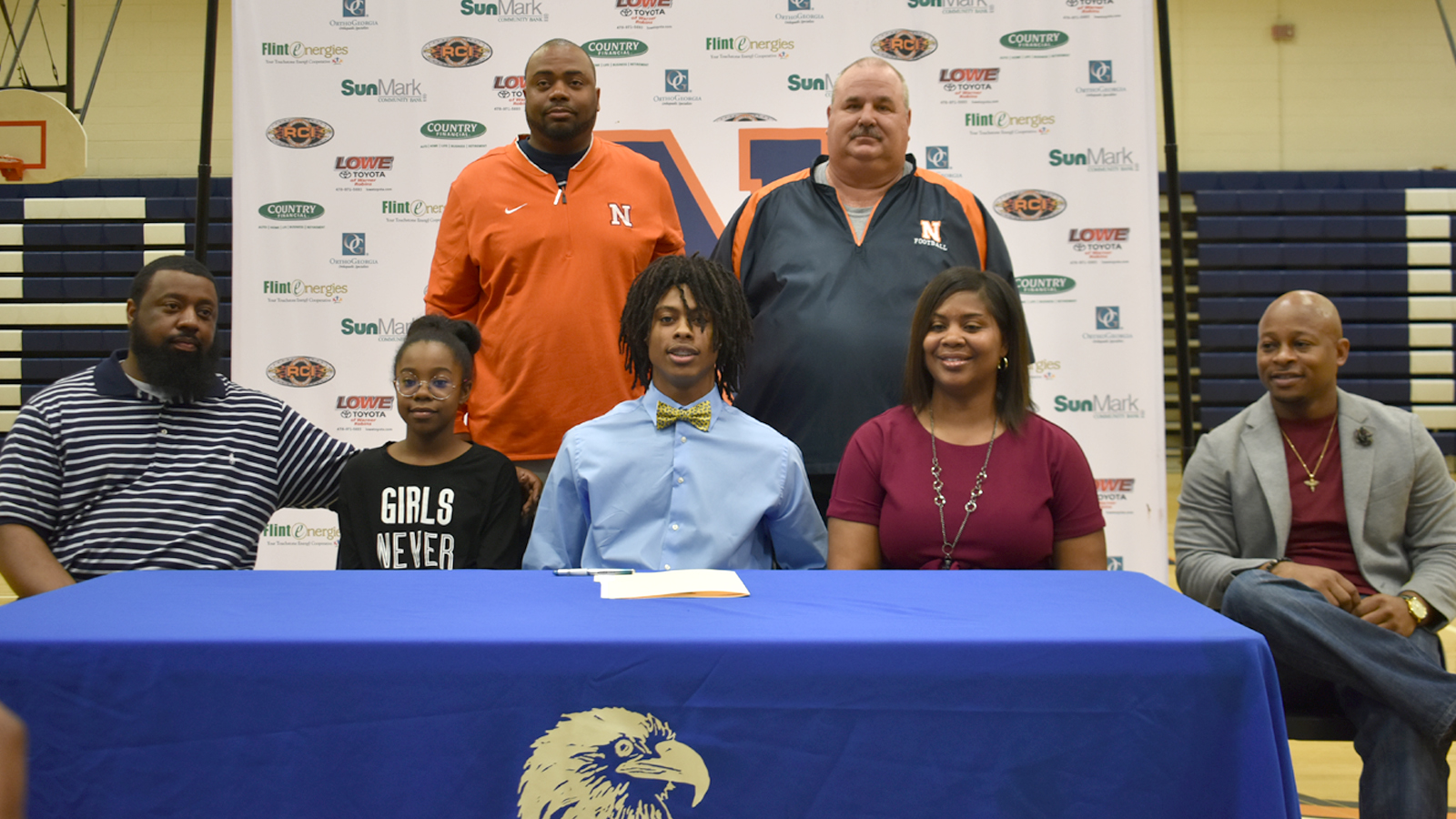 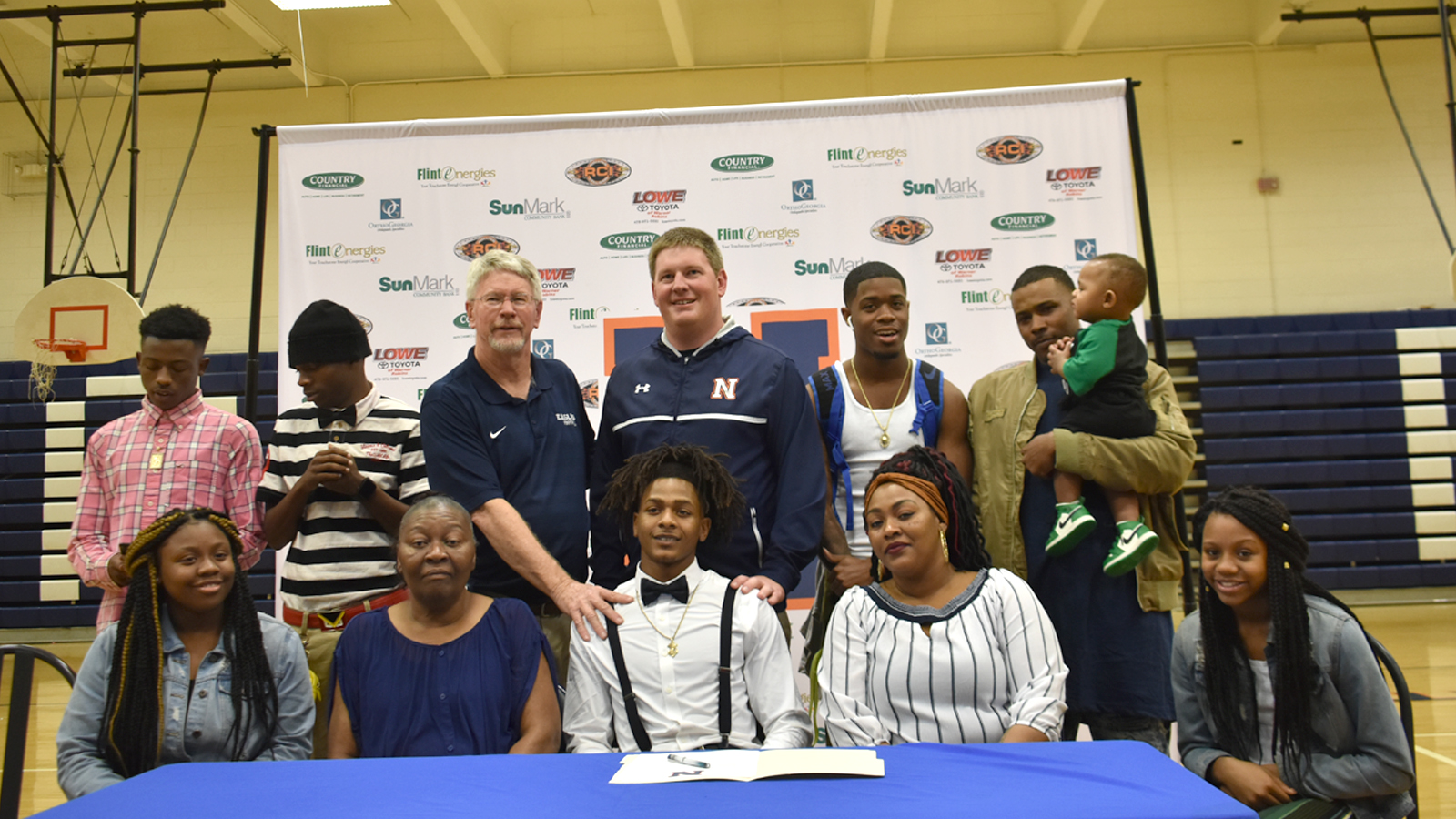 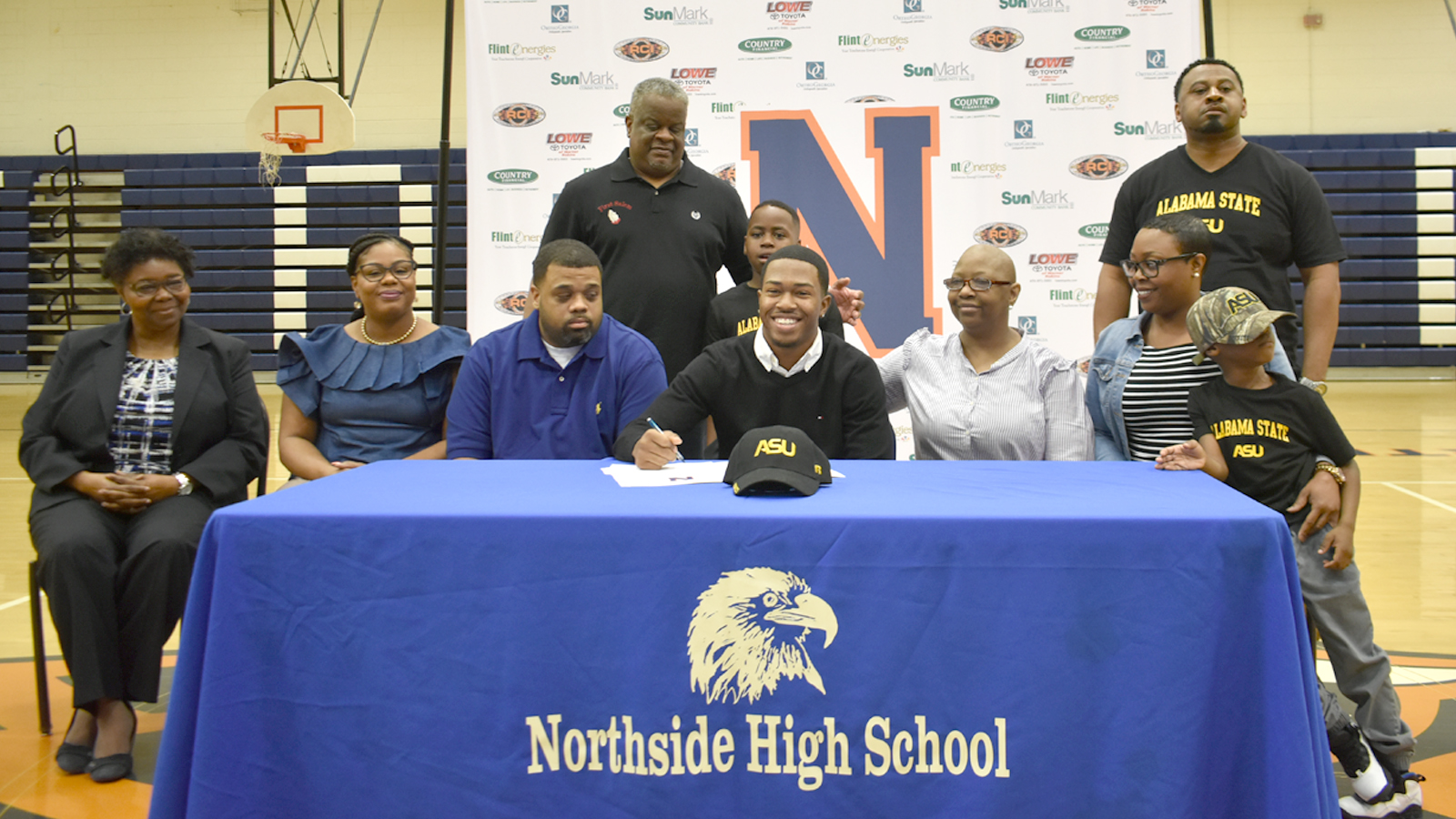 Jadin Daniels signed with Highlands Junior College in Kansas. Daniels was starter quarterback for Northside for two years. Daniels managed to pull off a total of 3,238 rushing yards and 31 touchdowns during his high school football career. He was named the Georgia 6A offensive player of the year and All State first team. Said Kinsler: “Jadin is a very versatile athlete that can play many positions which is very attractive in a college game.”

Daniel Neal signed with Alabama State University. Neal was a three-year starter at Northside who played running back and wide receiver. He was Northside’s leading receiver with a total of 884 yards and 12 touchdowns. He was named MCP at the receiver position and named team captain. Kinsler said about him, “Daniel has exceptional speed which first got the attention of colleges as well as his very good hands and explosiveness after the catch. Neal can play a variety of positions on the offensive side.”

Kentrez Anthony signed with New Mexico Military Institute in Roswell, New Mexico. Anthony was a two-year starter at Northside at the safety position. He finished the season with 77 tackles, 1 sack, 3 tackles for loss, 5 interceptions, and 5 pass break ups. Anthony has 7 career interceptions.

“The coaches at New Mexico were impressed by his ball hawking, playmaking, and playmaking ability, Kentrez should excel at the next level because of his relentless play and skill set.” Kinsler said.

Cory Munson signed with Western Kentucky University. Munson finished his career at Northside with 30 out of 41 field goals achieved, a 42-yard punt average, and 29 kicks inside the 15 yard line. He has obtained the total points record at Northside High. Munson was a highly sought after kicker but he chose Western Kentucky for their engineering and football programs.

“Cory is a talented athlete as a kicker that excels in all areas of kicking. We look for Cory to continue to be successful at the next level.”

“McCall was highly sought after because of his coverage skills and ball hawking ability. He has shown he can be a cover corner or safety. McCall has all the tools to be successful at the next level especially the way the game is now played.”

Jordan Shealey signed with Lenoir-Rhyne University in Hickory, North Carolina with a track scholarship. Jordan’s freshman year she went to state in the 4 by 100 and 4 by 400 relay teams. Her sophomore and junior year she went to state as an individual Head Coach Mollie Jones said, adding, “She has always done well for us at the region meets.” 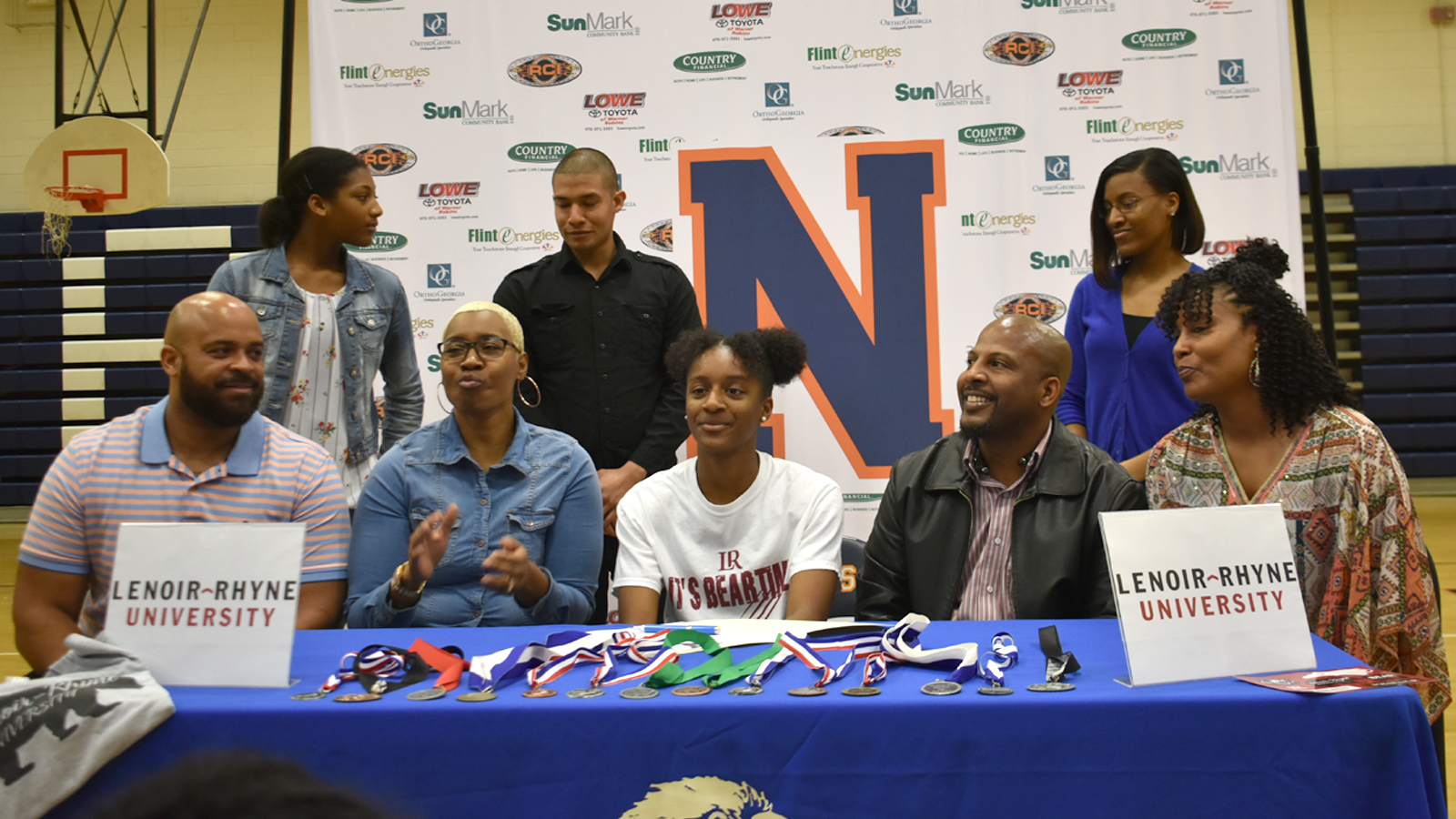