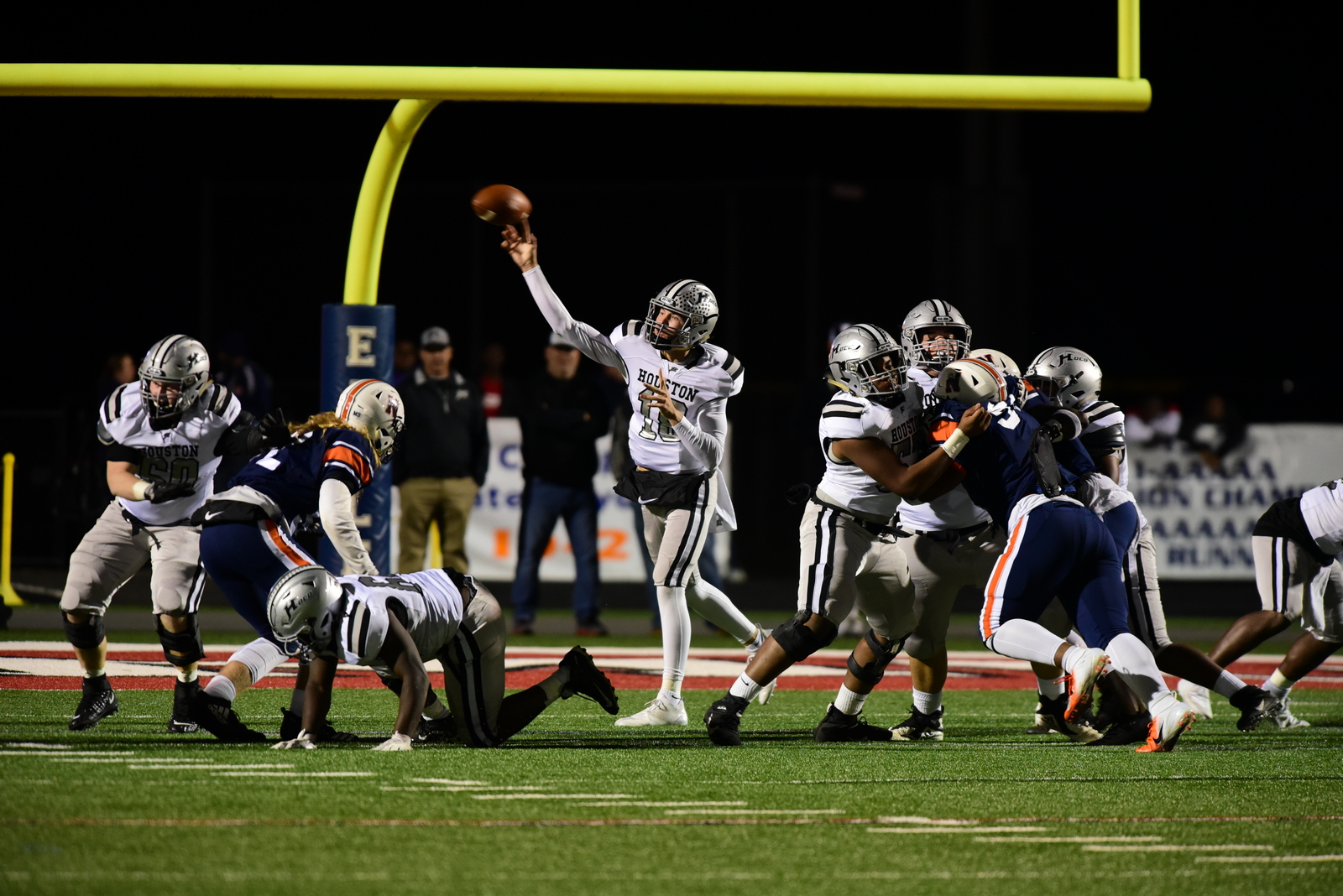 Same concerns … plus one.

Those are the “concerns” of Houston County football Head Coach Ryan Crawford – granted they’re typically the same concerns shared each year by all coaches – as he thinks about what the Bears would look like should football – or “when” football – returns in the Fall.

Under “same concerns”, there’s who will be at quarterback. Admittedly, “same concerns” hasn’t really been applicable in seven years. That’s because, he said, Houston County had Jake Fromm over center for four years and now Max Rigby has been in that role for the past three.

Now, however, it’s a matter of “several guys competing for that position,” Crawford said. “That’s one of the unfortunate things about not having a spring to iron that out.”

Two names do stand out, he added, Christian Lawhorn and Andrew Dunford. Lawhorn, a rising senior, played receiver this past year but also spent a good deal of time at quarterback for the junior varsity squad as well as on the practice squad, Crawford said. Dunford will be a sophomore. “He’s a really special talent. Really big kid with a lot of tools.”

He added: “The skill position on offense is a real question for us …

Not under “same concerns”, Crawford said, is the offensive line. “This year we’re going to really lean on them.”

He said the same at running back with players like rising seniors Corey Chaisson and Tyler Williams, as well as rising junior Simeon Askew, among others, returning.

On defense, well … there really aren’t the “same concerns” there, either. “I think the defensive line is a strength for us,” he said. “The secondary as well. We have a lot of guys with a lot of playing time coming back. (He pointed out that that was one of the advantages of being able to play deep into the playoffs – the Final Four before falling to eventual AAAAAA state champion Harrison – was getting them playing time.)

“I’m excited about that. (As far as the secondary), we have a lot of guys who are not just going to be content to cover you, but are going to try and pick the ball off. That’s what I like. If the ball is in the air, they’re going for it.”

Same concerns, but really off to a great start, he said, from the time they have been able to work together, talk together – over Zoom, etc: Coaching staff. “That’s one of the unfortunate things about this business. You have turnovers (in staff). People have different needs and endeavors and such.

Fortunately, there are only a few spots Crawford said he has had to replace.

The schedule would also probably fall under the same concerns, although this year it also brings in some new opponents. Those are: Crisp County, Heritage-Conyers, Statesboro and Newton. Perry (to open the year after a scrimmage with Jones County – four-straight road games follow that), Warner Robins, Veterans and Region 1-AAAAAA opponents Lee County, Valdosta and Northside represent familiar faces.

So, that just leaves the “plus one”.

It is a concern right now – became a concern when the coronavirus pandemic shut activities down – and will remain a concern for the duration, Crawford said.

That is: “Football is such a physical game and strength training and agility is such a big deal. Really, the main thing, and what’s going to hurt a lot of people (staffs), is just getting the kids into playing shape.

“You’ve got a lot of collisions in football. And most kids that train at a high level, they can handle that over the period of a season.”

“And that’s probably the biggest concern for me. The weightlifting part. The lifting part. To be able to move a person from point A to point B, and you’re not able to get them over to point B. And then just the ‘friendly fire’ of football, people around your feet and legs and shoulders, just being able to take those bumps and bruises because you haven’t been lifting.

“Lifting is not about just getting stronger and beating the man in front of you. But it’s also having that pre-conditioning where you’re not getting hurt and you can prevent injuries.

“So, I think us as coaches, we’ve got to do a good job in doing those things this offseason (to help prevent that).”

Look back: 2019 Houston County Bears
Tom Mobley returning as voice of the Demons