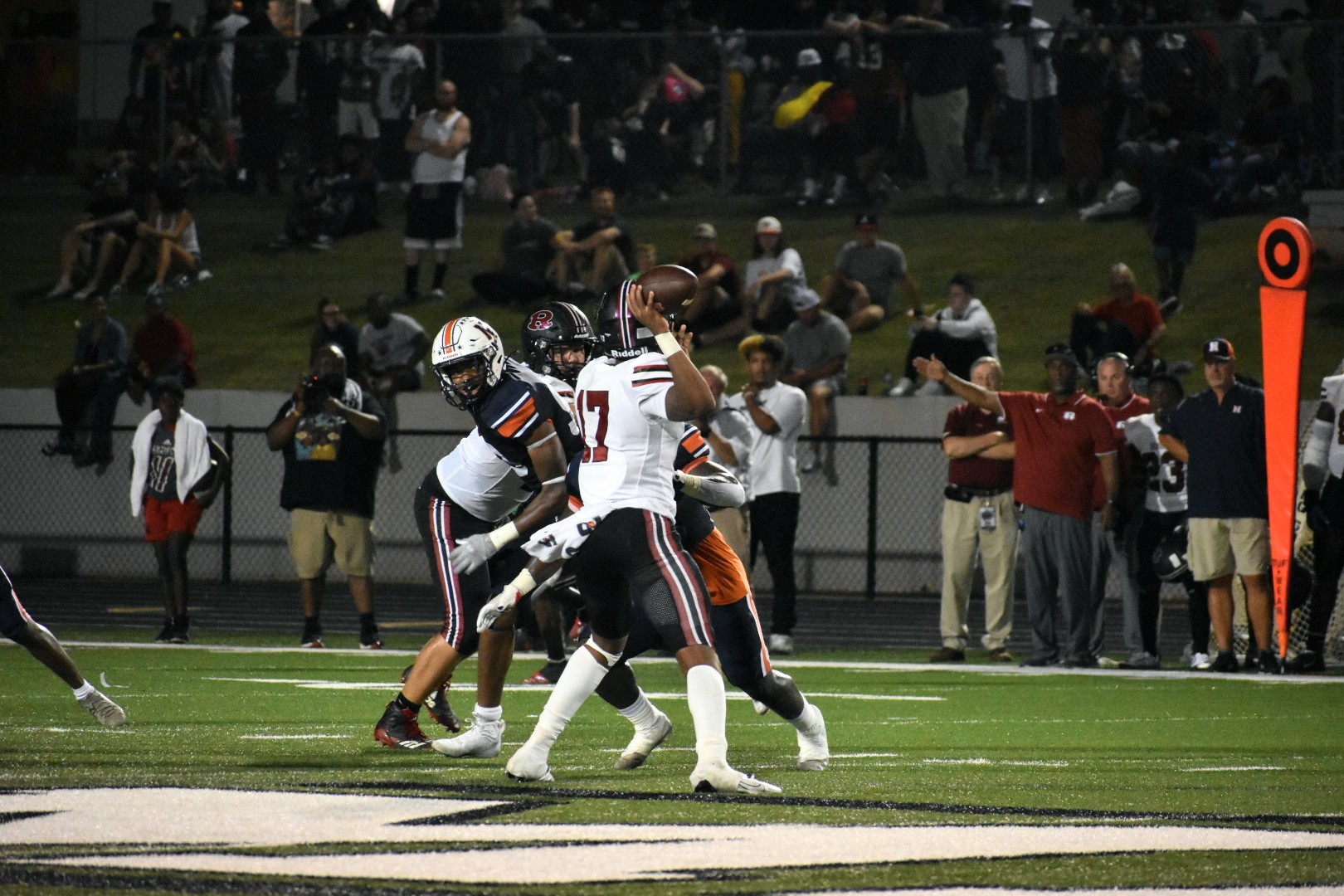 The win streak continues. It now stands at six-straight, Warner Robins over Northside.

Chase Reese’s 15-yard run in overtime coupled with Daniel Barber’s point after made the difference on the scoreboard, 17-10, Demons over Eagles.

It told only part of the story. Along the way both had a chance to put points on the board, points that could/would have made the difference and kept it from the extra period.

For example. Warner Robins, with the score tied at 10 and the game just starting into the fourth quarter, put together a 13-play drive that went from its own 19 to Northside’s 8 before stalling. About midway through the skies opened up – really opened up. That could account for a snap that zipped through the hands of the holder when Daniel Barber lined up to attempt a 28-yard field goal.

For example. Northside. It blocked a Demons punt with less than a minute left in the game. It was pushed and prodded and eventually downed on Warner Robins’ 8. Two plays later, however, the slick, slick turf again coming into play more than likely, the snap got away. The Demons recovered.

The Eagles also put together a 12-play drive early in the second quarter that went from their 43 to the 3, but their chip shot at a field goal went just right of the bar. 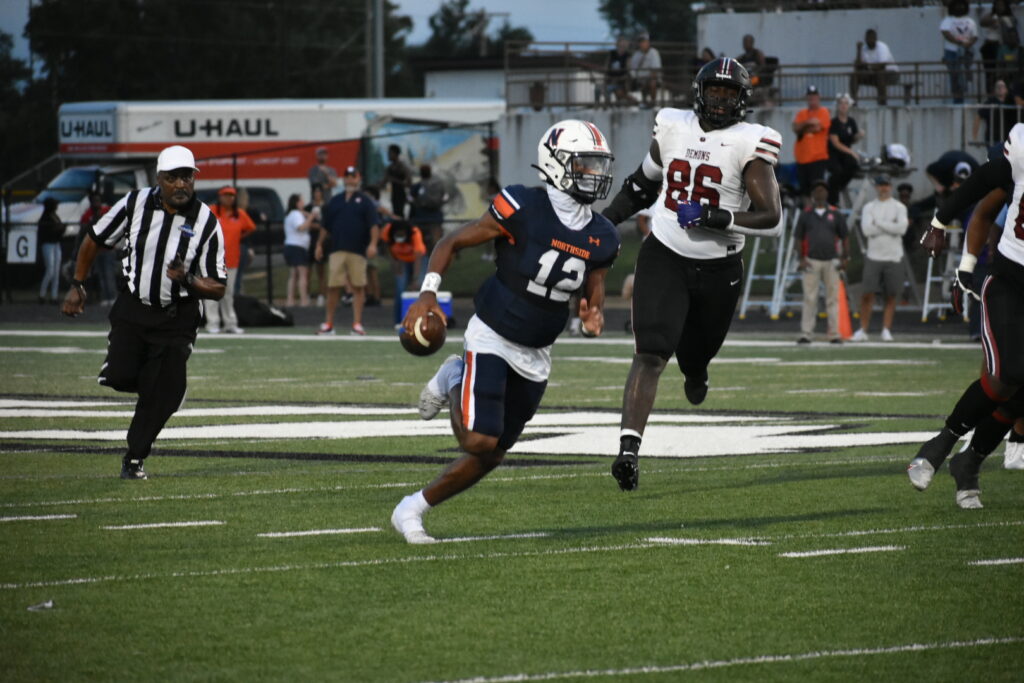 Northside went three-and-out and punted to start the game.

Warner Robins went 10 plays and made it to Northside’s 28 before it stalled. Barber came on and kicked a 44-yard field. That came at the 6:11 mark.

The Eagles fumbled on their next possession, but the Demons could do little to capitalize. After three plays they punted. Northside took it on their own 40 and got it to Warner Robins’ 20 before a sack pushed it back to the 34. It eventually faced a fourth-and-18 – too far away for a field goal, too close for  punt – went for it and came up short.

The Demons took over, picked up one first down, but couldn’t gain another. They lined up to punt, but the snap – no Mother Nature, yet – sailed over the kicker’s head and into the endzone where Northside recovered it for the safety.

The aforementioned missed field goal followed and following that, the Demons scored. They went from their own 20 and ran off eight plays. The biggest was a 44-yard pass from Reese to Isiah Canion that put the ball on the 1. Reese ran it in from there.

Northside punted on its next possession. Warner Robins was picked on its. That paved the way for the half. 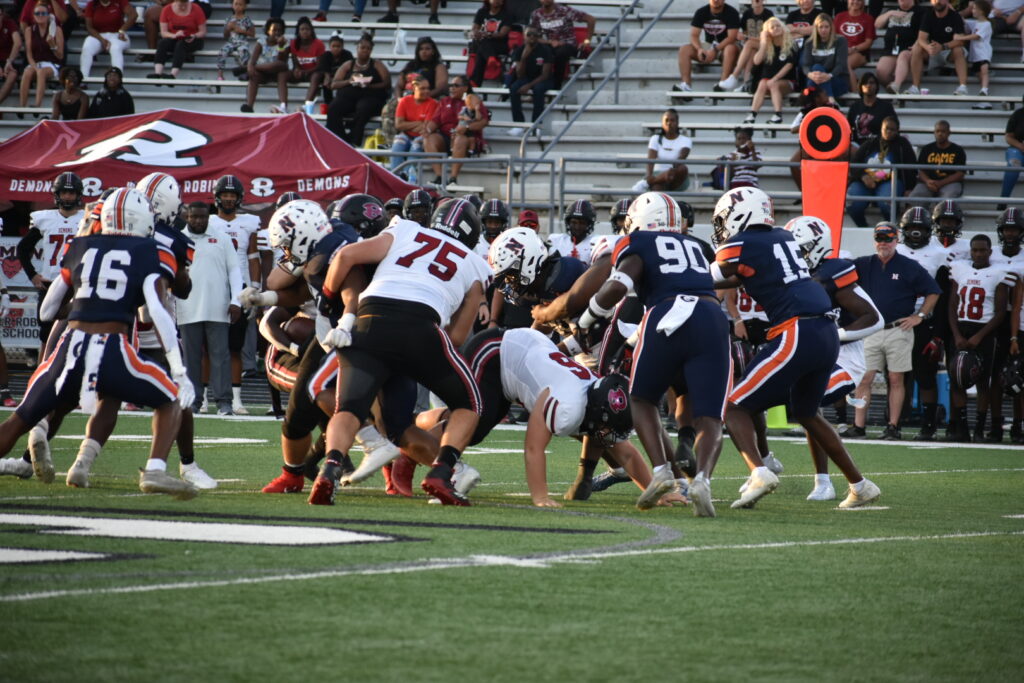 The Eagles then put together a 10-play drive that went 95 yards for the score. Brandon Wilson caught an eight-yard pass from Damien Dee for the score and then Dee converted the two points to make it a tie ballgame with 3:01 left in the third.

Warner Robins turned the ball over on an interception on its next possession. Northside couldn’t capitalize and punted after three plays. Then came the aforementioned drive by the Demons where the ball went through the hands of the holder.

Northside punted then blocked – another already mentioned play. Finally, the Demons took it with 44 seconds left in regulation, picked up a couple of first downs before spiking it with 3 seconds left. They attempted one long pass into the endzone but it was broken up.

The Eagles won the toss in overtime but deferred. The ball was placed on the 15 where, again, already mentioned, Reese ran it in. Northside still had its turn. It netted three yards on two runs, had a wide open receiver drop a pass in the endzone and then had a pass broken up to give the Demons the win. 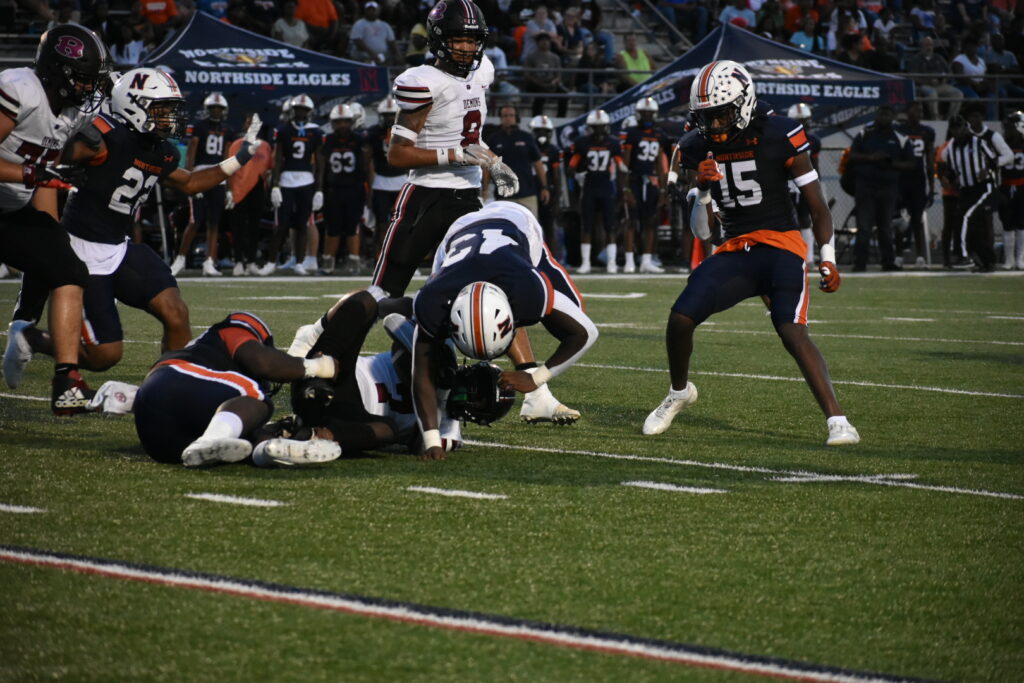 Bears, Panthers: By the numbers
Panthers roll past Greyhounds