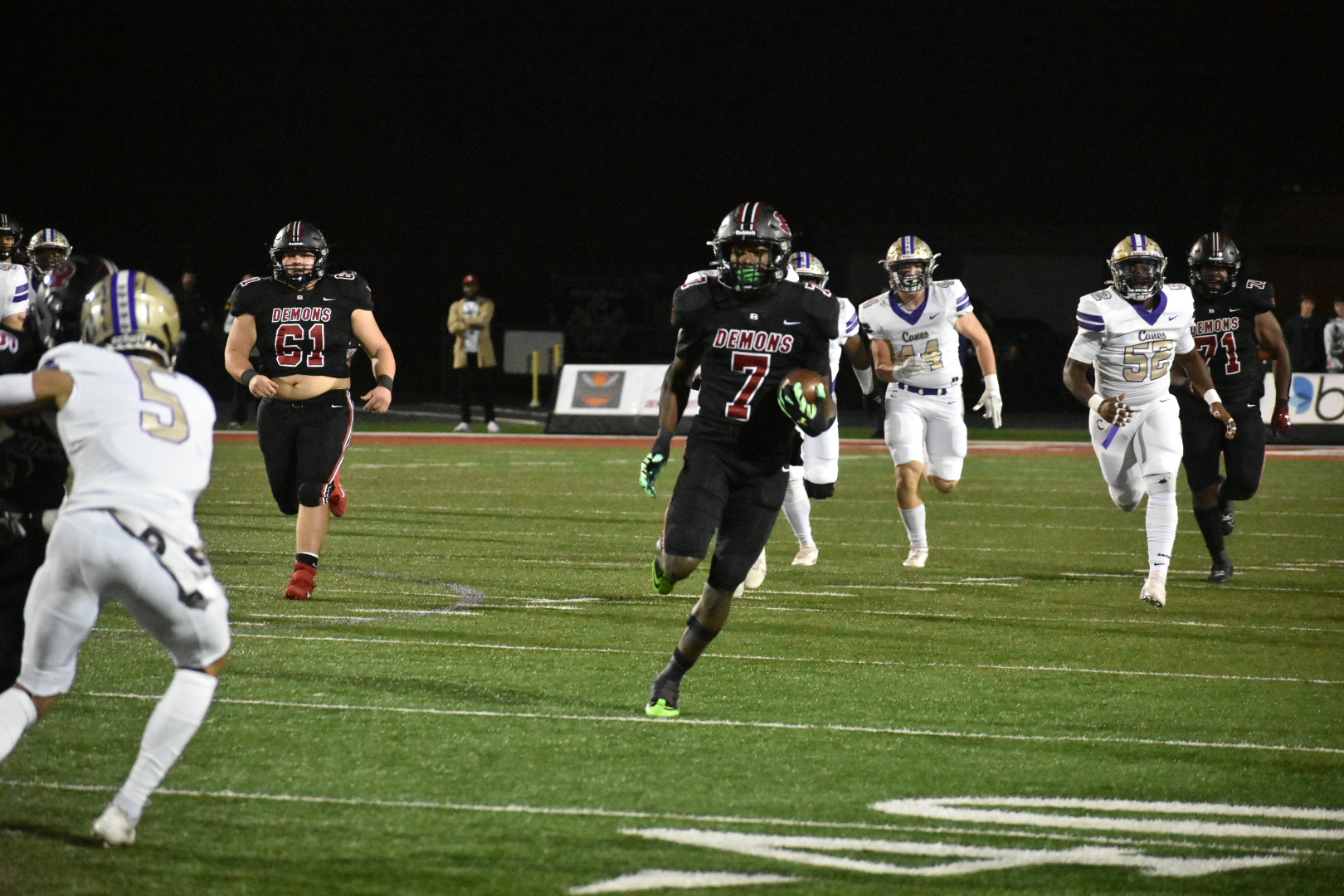 Cartersville became the victim of the trifecta. Warner Robins joined Buford and Eagle’s Landing Christian as the only teams in the state to make the GHSA state tournament finals six straight years.

It, via its 35-10 win Friday in McConnell-Talbert Stadium, also has a chance to make it three straight AAAAA championships.

The Demons made it look as easy as the score made it look easy. They only scored three in the first but got rolling in the second. They scored 17 during that quarter, 12 in the third and three in fourth. 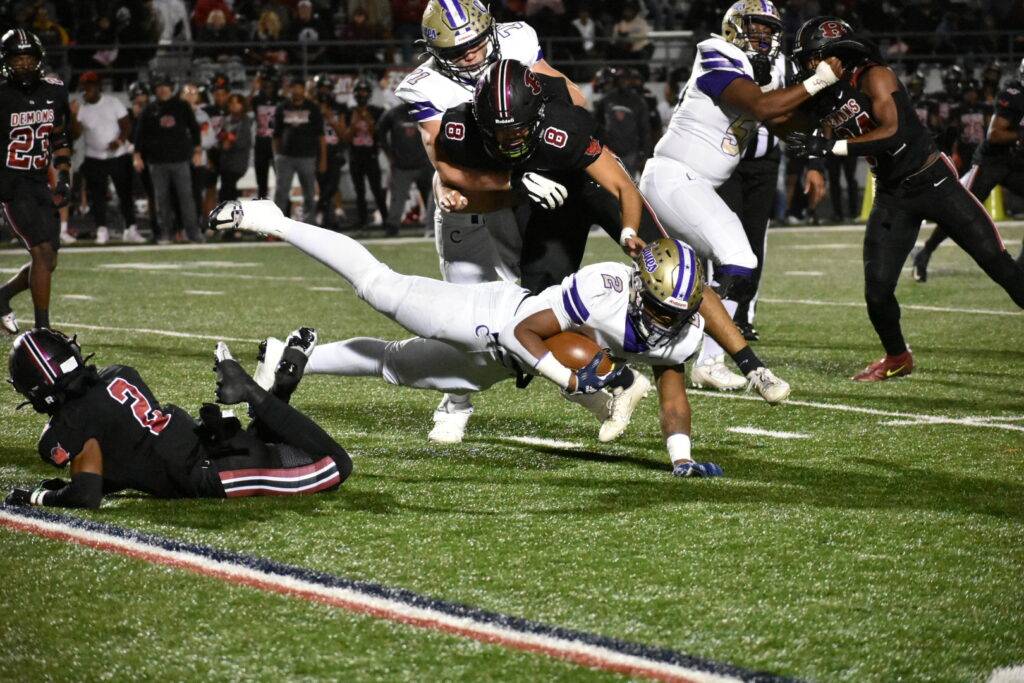 The Purple Hurricanes scored their only points of the half on their first possession, a 27-yard field goal by Ryan Johnson. It might not have been had not the receiver wrestled the ball away from a Warner Robins defender. That got the ball to the 11 where the Demons held. The drive was eight plays in length.

From there it was all Warner Robins. It – mostly behind the legs of breakaway sprints by Malcolm Brown, but the ball was spread around considerably – was able to tie on Daniel Barber’s 36-yard field goal. That came with 6:25 left in the quarter and was the finish to a five-play drive that started at the Demons’ 35.

Cartersville turned it over on a fumble on its next possession. That came as it completed a long pass on fourth-and-two. Warner Robins took over on their own 28, ran off 11 plays and scored on Elijah Antonio’s run off left from the Wildcat formation. Barber made it 10-3 with 10:58 in the second.

An interception by Rashan Dinkins gave Warner Robins a chance to add to its score but Barber’s field goal try of 42 yards was short; maybe deflected a bit.

The Purple Hurricanes went three-and-out and punted. Two plays in Brown broke up the middle and raced 49 yards for the score. (He had 141 of the Demons’ 156 in the first half.) Barber made it 17-3 with 6:12 left in the second.

Another fumble, this one recovered by Khebrion Puchoon, set Warner Robins up yet again. And yet again, extremely uncharacteristically – for only the second time this year – Barber missed again.

It mattered little. Cartersville was held to another three-and-out. The Demons were downed on the visitor’s 44 with the punt. They went eight plays and scored on Barber’s 22-yard field goal. That made it 20-3 at the half. 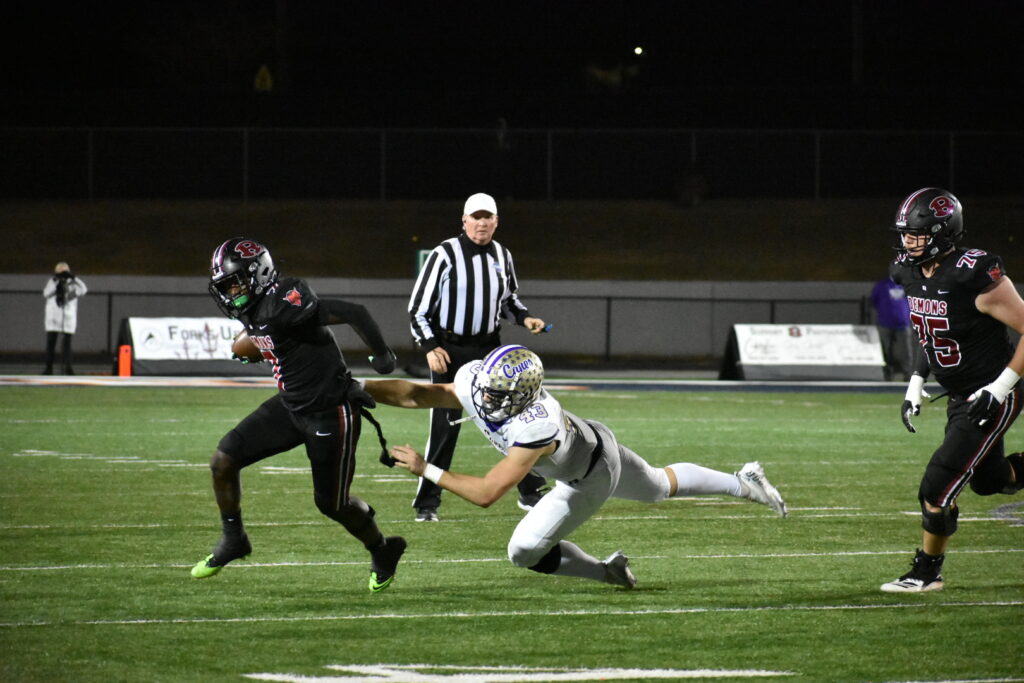 Warner Robins won the coin toss. Deferred. Took the ball to start the third and went 71 yards on nine plays and scored. The Purple Hurricanes answered with a score. A 53-yard pass didn’t hurt and it got them to the Demons’ 32. Two plays later quarterback Paul Gamble found Collin Fletcher in the right corner of the endzone.

Warner Robins answered that with a 15-play drive that went 68 yards. It ate up nearly five minutes of the clock – down to 21 seconds when Brown fought his way into the endzone. Barber’s kick hit the goalpost making it 32-10.

Cartersville, after four plays, punted to usher in the fourth quarter. The Demons also punted after a three-and-out but another pick by Dinkins set Warner Robins up on the Purple Hurricanes’ 48. Barber kicked a 47-yard field goal after three plays to make it 35-10 with 5:14 left.

Cartersville converted a fourth-and-two and then threw a 41-yard pass to get it to the 9. After four plays, that’s where it remained. The Demons took over and ran out the rest of the clock. 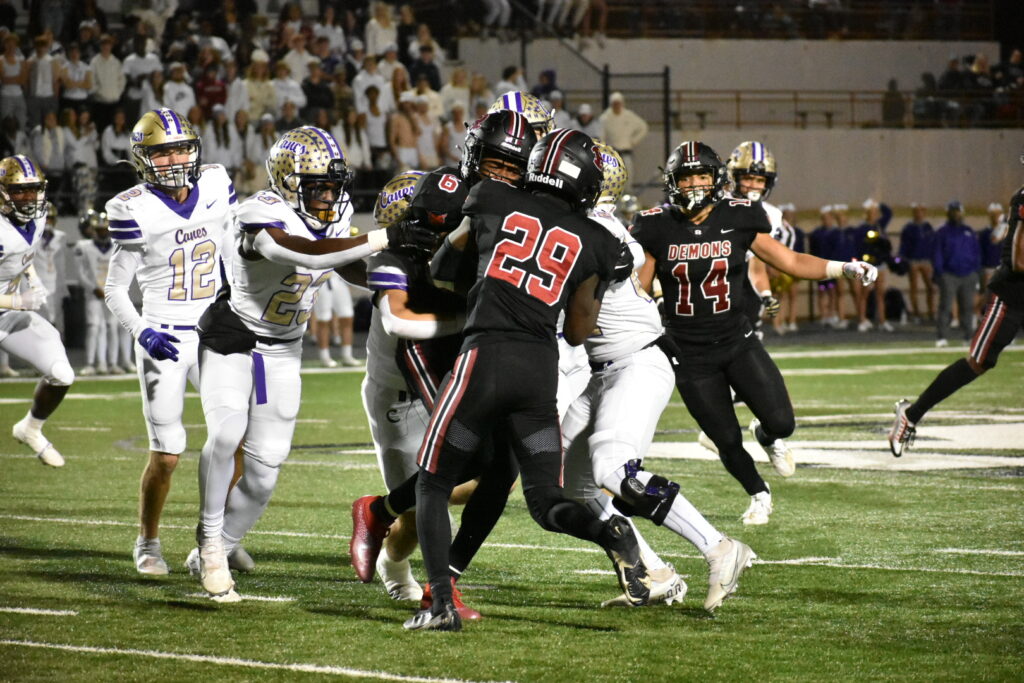 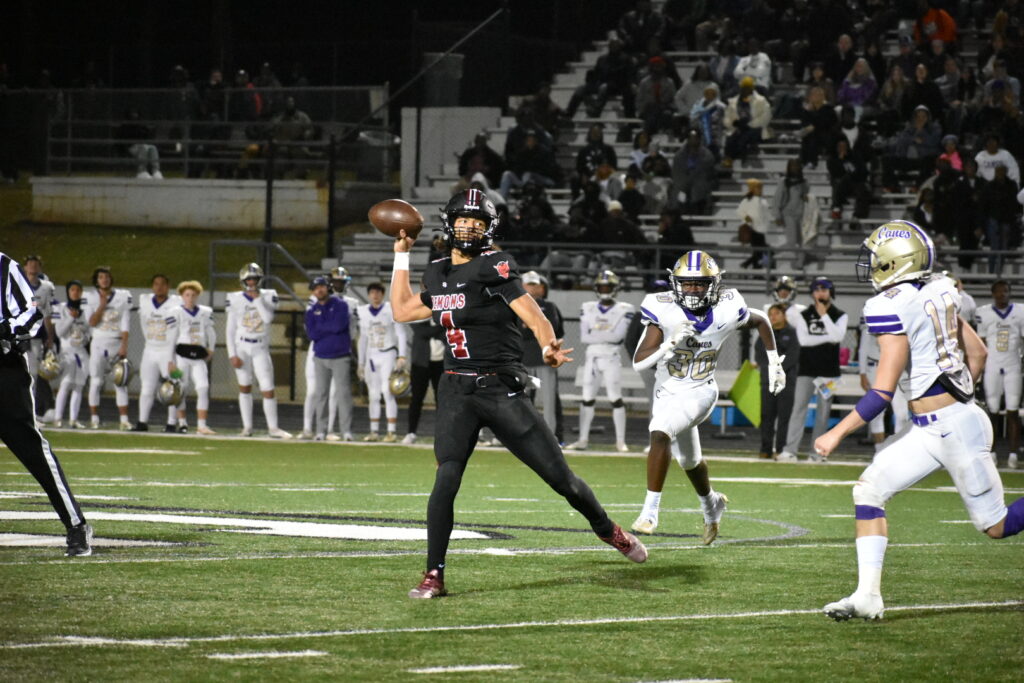 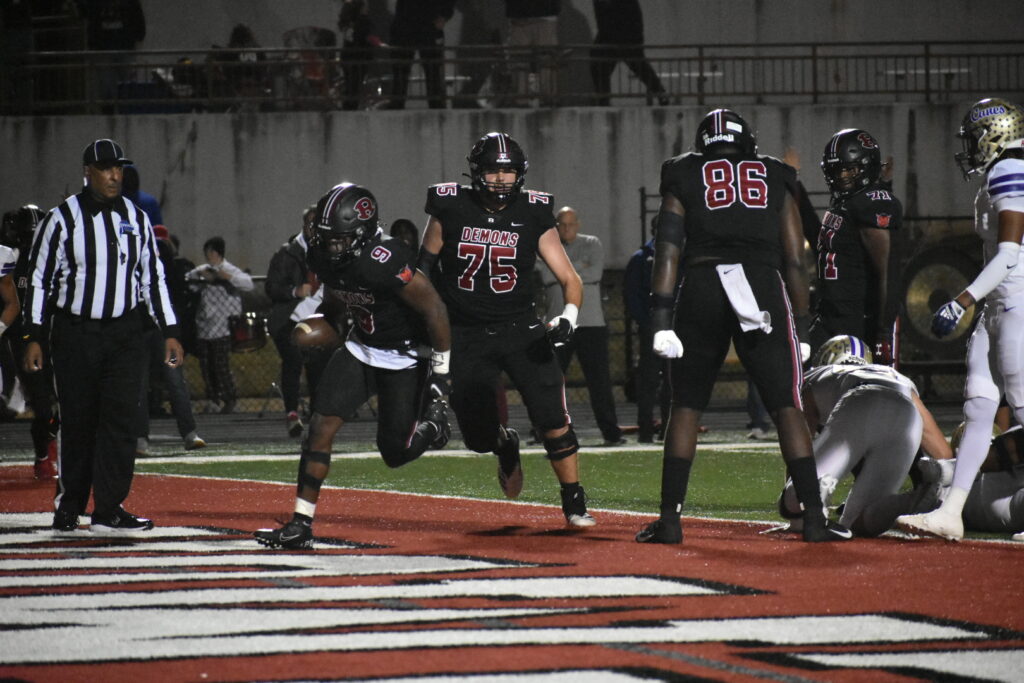