Bears rally then hold off Eagles 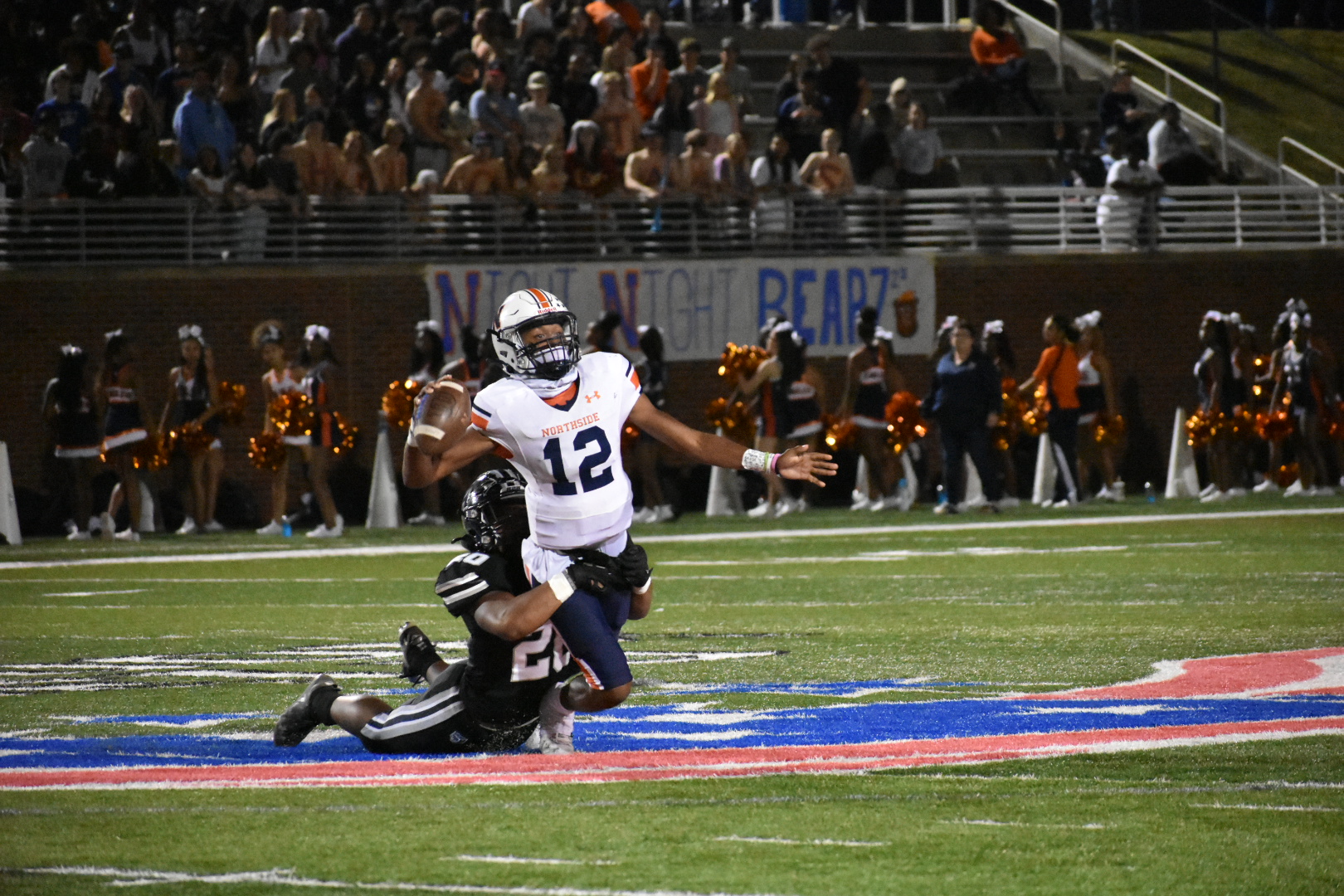 It was the proverbial tale of two halves. The first belonged to Northside. The second to Houston County. The difference turned out to be four points in the Bears’ favor in a 21-17 win.

Both now stand at 1-1 in Region 1-AAAAAA. Houston County improved to 6-1 overall. Northside slipped to 4-3. 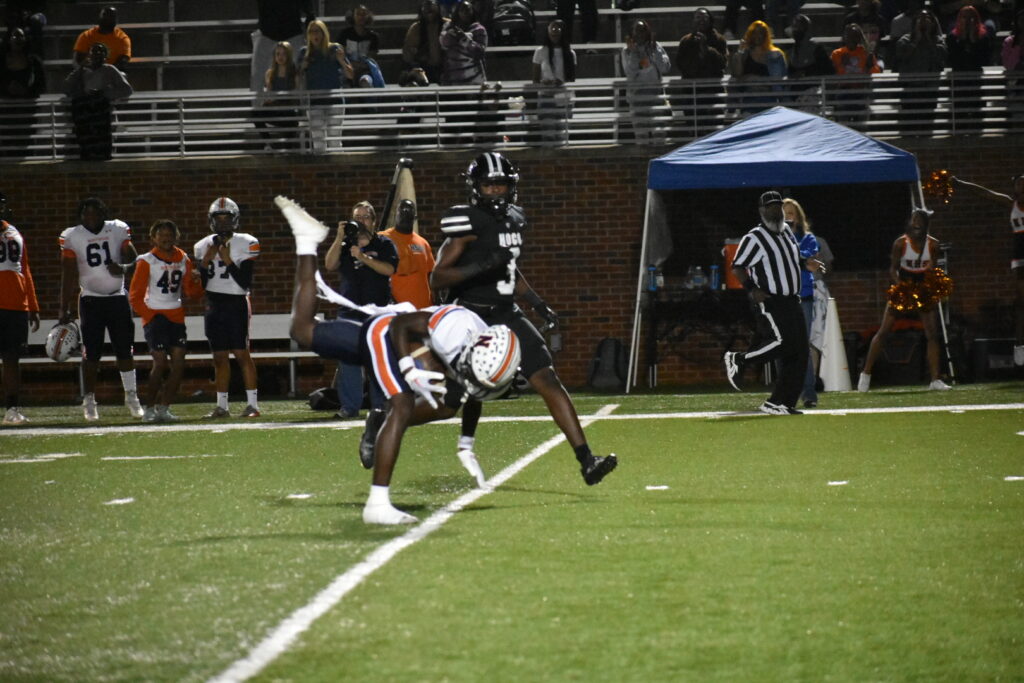 It started the game with a five-play, 60-yard drive and score. Forty-four of those yards came via quarterback Damien Dee. Thirty-eight of it was on one run – the one that carried it into the endzone. Ashton Paredes made it 7-0 with 9:44 showing on the clock.

Houston County moved it to near midfield on its first touch but punted on a fourth-and-three.

The Eagles made it 10-0 on Paredes’ 34-yard field goal. That came on the heels of nine plays and three more first downs added to the two from the first drive.

The Bears moved it from their 20 – the kick going into the endzone – and were again faced with a fourth-and-three. This time it was on Northside’s side of the field – the 38 – but a pass fell incomplete to turn it over on downs.

The Eagles also turned it over on downs when they were unable to convert a fourth-and-five. That came on Houston County’s 24, with a drive starting on their own 46. The second quarter also started during that drive.

The Bears got on the board following. They started on their own 33. Two plays in it appeared they would go nowhere, but a facemask pushed them to Northside’s 42. Three plays later they had it on the 4 where Nick Jordan finished it off. Thomas Bryant’s point after made it 10-7 with 9:05 showing on the clock.

Northside, after running eight plays and moving it from its own 20 to Houston County’s 33, was intercepted. The Bears, however, were unable to capitalize and punted on a three-and-out.

The punt put the Eagles on their own 16 and with just over two minutes left in the half. It took about 30 seconds for them to score. Dee ran it to the 42 on the first play from scrimmage and then on the second found D’Shawn Hooten for the score. Paredes made it 17-7.

The Bears had one more possession before the half. They began on their 20, moved it to the Eagles’ 39 – on a fourth-and-five – but an incomplete pass and a short pass brought the clock to zero. 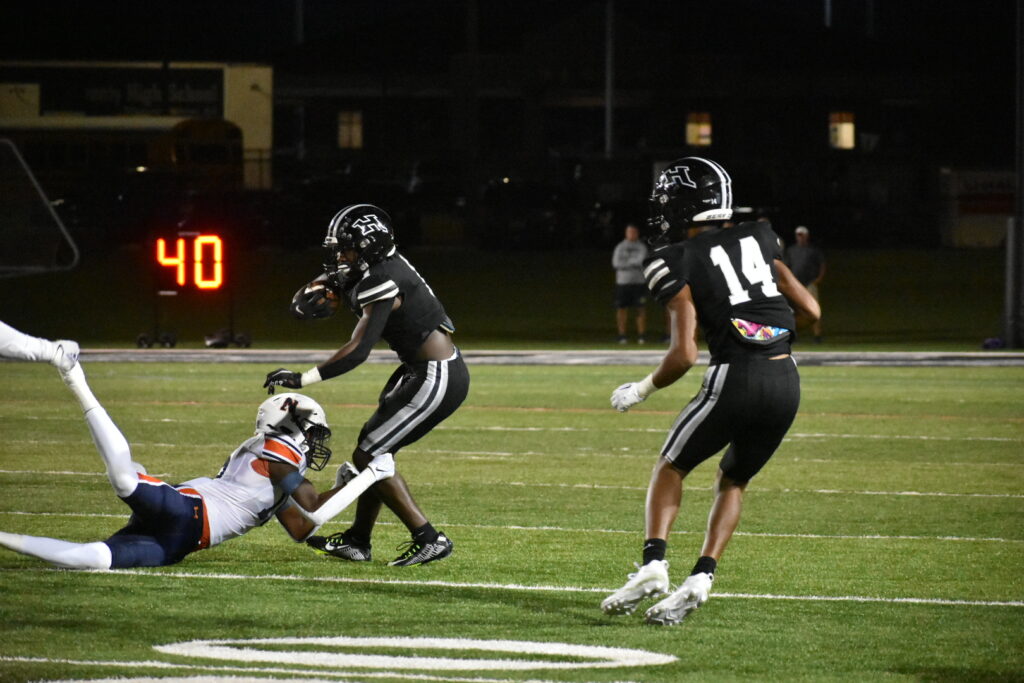 Houston County got within three points on its first possession of the third. A great return by Recordo Tarver put the ball on the Bears’ 49. Two complete passes and two decent runs put it on the 27 where Hill connected with Ricky Johnson in the endzone for the rest. Bryant’s PAT made it 17-14 with 10:57 left on the clock.

Northside moved it from its own 20 to Houston County’s 32, but an interception ended its threat. Houston County then went out front for good – but you wouldn’t know it until the end – with a seven-play, 48-yard drive. A 15-yard pass from Hill to Kale Woodburn accounted for the touchdown. Bryant was again good for the point after.

Both punted twice to finish out the third. That sounds simple enough, but there was plenty of defense and offense by both to fill the gaps of those possessions.

Finally, the game wound down to just over three minutes with the Eagles, after another punt, starting on the Bears’ 46. On a third-and-eight Dee ran it to the 30. He moved it to the 23 on the next play from scrimmage but a false start instead negated it and pushed it back five. He next tried to pass but it fell incomplete. He was sacked on the next play. The Eagles were penalized five more on the next and then finally on a fourth-and-19, Dee’s pass fell incomplete.

The Bears took over and ran off the final 50 seconds for the win. 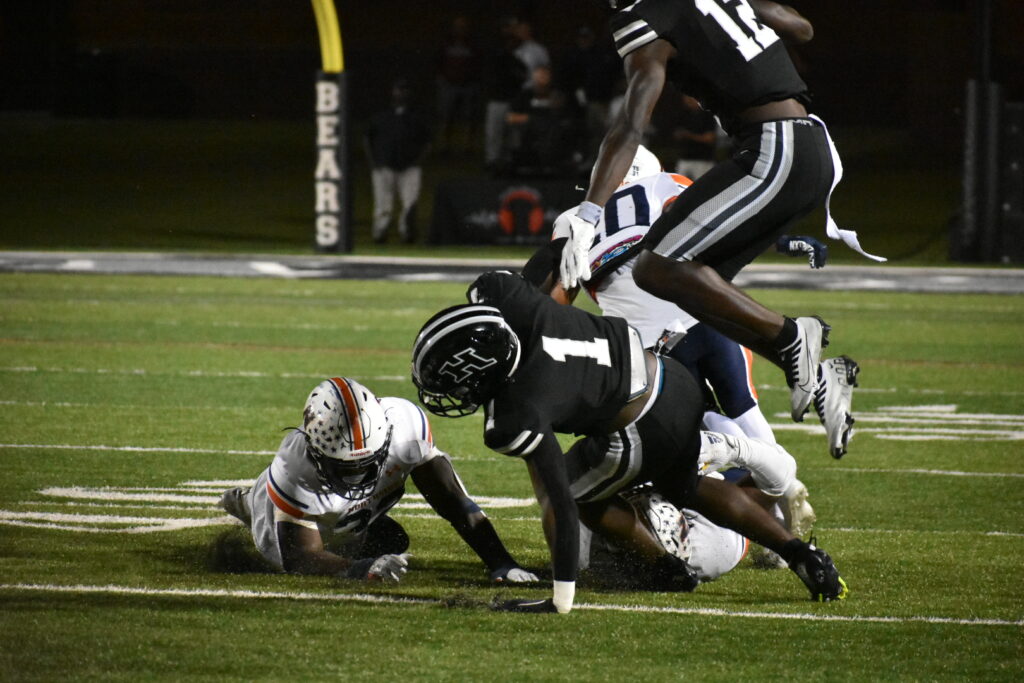 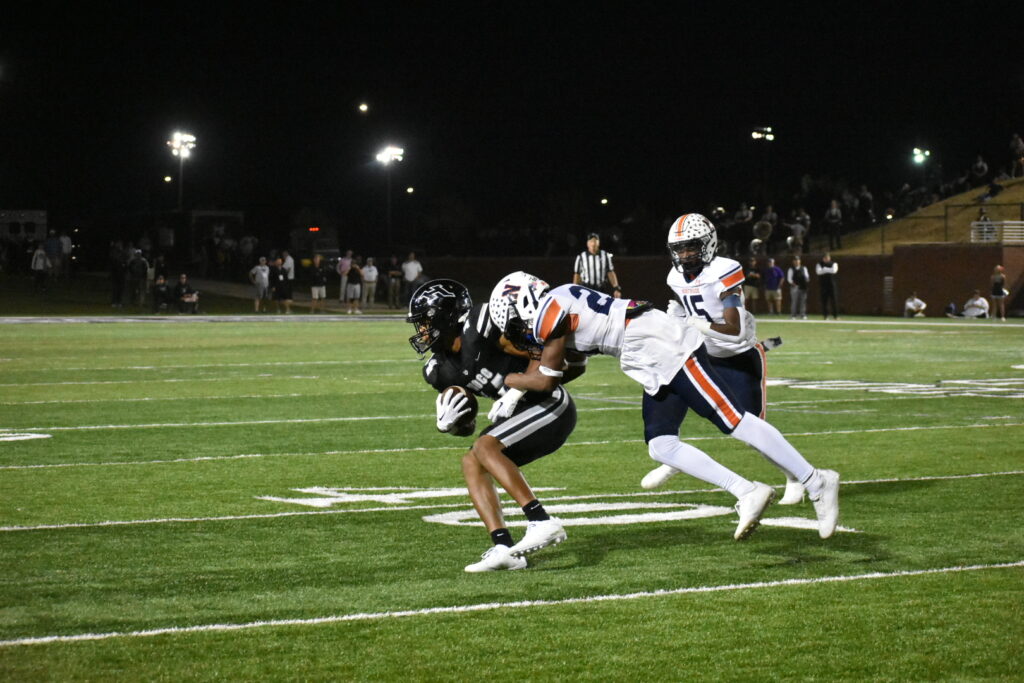 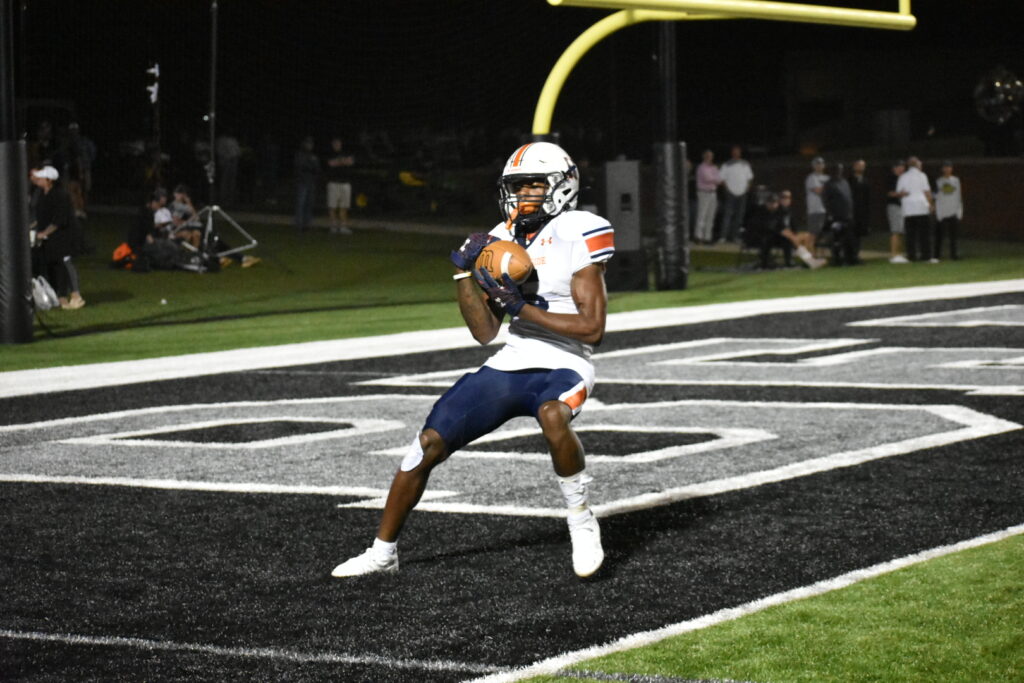 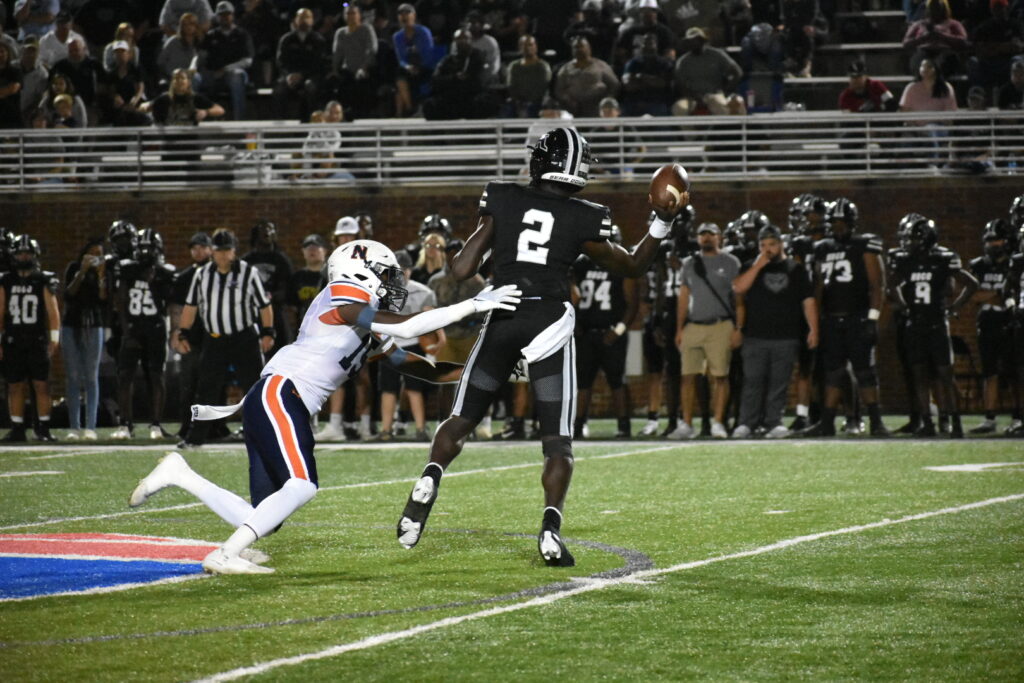