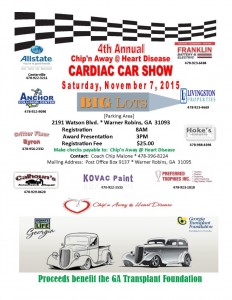 The life of Coach Chip Malone touched so many. It was hard not to be drawn in by his warm smile and positive attitude.  He dedicated his life to helping others through his work as a coach and through his tireless dedication to the cause of heart health and transplant assistance.  Sportsmic was scheduled to meet with Chip for a taping of “Conversations” near the time that he became ill, eventually passing a few days later.  In tribute to Coach Malone, we decided to gather some of his close friends and colleagues to talk about this life and coaching career. Below are the results of those conversations which include Tom Mobley’s interviews with J.D Sessums, Mike Martin, Kevin Wall and Dave Anderson.

Through Chip’s foundation, Chip’n Away @ Heart Disease, Chip worked to raise money for those in need of organ transplants.  Each year near the anniversary of Chip’s own heart transplant the organization held the “Cardiac Car Show”  all of the funds raised were donated to the GA Transplant Foundation.  The fourth annual event is scheduled for Nov. 7 in the Big Lots parking lot.  For more details or to register please visit the Chip’n Away @ Heart Disease website.

Sportsmic is proud to present this special edition of “Conversations” in tribute to our friend, Chip Malone.